Relocations and In Take
Our Cats after Release
Bad Calls/Emails:  Two Hours Away
BMG (Bitch/Moan/Groan):  Relos Slow Down but...
OMG (Oh My God):  New Cat at Alamo

Our Cats after Release:
1.     Waxahachie – Lucy and Danni were placed in this barn/workshop.  They have not been spotted but food is disappearing…all good.
2.     Ennis – Fluffy, Rowdy, and Jeremiah were placed in this barn.  All are still around but Fluffy and Rowdy are showing themselves regularly to the children of the barn owners.
Bad Calls/EMAILS:  Two Hours Away
People call and (it seems like) they expect you to rush right over there and trap the cats they are worried about.  WELL – the trapping needs to be done by the feeder or the person living near there then transported to Barn Cats after sterilization.  This person called on Saturday, is crying/crying/crying over the phone and has no transportation.  You know – I am sorry for the cats but there are only so many hours in the day.  We are dealing with 30 to 40 cats at a time and you are feeding 7…you do the math!   ALSO – we are now in our slow season due to the extreme heat.  I have to be very careful about putting cats in a HOT BARN in a cage for a 2-week relo period.  I took out fans with both relos this week but that only works if there is electricity in the barn/shed area.  So, I can help this person in September who is two hours away but only if she traps the cats and/or works with Feral Friends or some other TNR group to get them here.  I had to yell at her to get her to stop sobbing.  These people have little to do and obsess over the cats.  I gave her some options, asked her to decide what she wants to do, then call me back.
We shall see...

BMG:  Relos Slow Down but Cat Calls Continue
Above, I explain that this is our slow season for placements.  Barn owners are thinking about vacations, June weddings, when to take the kids to camps, etc.  Thinks will pick up in September but the many calls/emails continue for me to take in cats.  This happens each year with the heat of the summer and the cold of the winter.  We take who we can when we can but I need to concentrate on the in-danger cats or the injured cats.
OMG:  New Cat at Alamo
There was a black cat at the Alamo when the Mexicans took it from the Texas patriots.  In more recent times, an orange tabby lived in and on the Alamo grounds.  It was taken care of by the staff and controlled rodents for them.  That cat passed away last summer.  It has taken a year but there is now a new calico making her home in that historic residence.  This picture was from our Fox station here in Dallas.  Miss Isabella Francisca Veramendi De Valero has big shoes to fill! 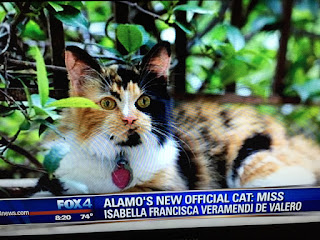 Relocations and In Take
Our Cats after Release
Bad Calls/Emails:  If You Feed Them, You Own Them!
BMG (Bitch/Moan/Groan):  Now I Have 20
OMG (Oh My God):  Bat Rescue
Tribute to Jimmy, Barn Cat from Katrina

Our Cats after Release:
1.     Van Alstyne – Flower and Princess were placed in the garage.  Princess was seen that morning on a pile of bricks – critters hide there for sure!   Flower has also been spotted so all is good in Van Alstyne.
Bad Calls/EMAILS:  If You Feed Them, You Own Them!
By Texas law, if you feed them, you are considered the OWNER!   When you neighbors complain, don’t say “they are not my cats” because by Texas law they are your cats.  Sorry!

BMG:  Now I Have 20
I get these calls all the time:  “I started feeding a cat last year.  Now I have 20.  What shall I do?”
Well it is a little late.  You cannot starting feeding one cat without getting that cat sterilized.  That cat will attract others, they have kittens, then kittens have kittens – YES, they will breed with mom to kid, etc.  I have to refer them to folks that do trapping and spay/neuter.  We are on the back end of the problem and they need help on the front end.  ALSO – 9 out of 10 time the person is elderly and/or disabled.  Just feeding is not really helping the cats!   Soon your neighbors are angry with the howling when mating, the digging up of flower beds, paw prints on cars, and on and on and on.   Just get them sterilized!!!!!!!!!!!!!!
OMG:  Bat Rescue
YES – there are people that rescue bats!   The Barn Cat volunteers found a mama bat in my backyard with 3 babies attached to her.  Donna moved her into the monkey grass where she would be protected.  Sometime in the last 13 years of Barn Cats, I received a call from someone that did bat rescue…so I know these folks existed but did not know where.  I found Bat World Sanctuary Inc. at https://batworld.org/local-rescue/.  From there you enter your zip code and a BUNCH of names/phone numbers popped up in the DFW area.  One was just down the road from me in Flower Mound.  I called her and took over our mama.  She said the babies get too heavy and mom cannot fly.  She was going to remove the two bigger babies and release mom with the smallest of the three.  The other two will remain in rescue until they are old enough to be on their own.  This was very interesting.  You never know what you can find on the internet. 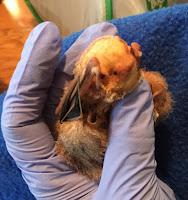 Tribute to Jimmy, Barn Cat from Katrina
Jimmy was a tabby and white cat from New Orleans.  He survived hurricane Katrina in the 9th Ward – the worst hit area.  He was rescued by volunteers and taken to the Alley Cat Allies base came across Lake Pontchartrain from New Orleans.  Trapping of the feral cats could not start until two months following the hurricane due to the curfew so Jimmy lived in that toxic mess for at least two months.  I went to New Orleans to volunteer for one week and brought back 10 or 12 cats with me to the Dallas area.  Jimmy was brought to the Dallas area in December by another transporter.  Barn Cats, Inc. took a total of 54 from the New Orleans area over a 6-month period.    On Christmas day 2005, Jimmy was in a cage in my dining room.  He was reaching out to “play” with my guys…so…I let him out.  He got along very well with the other cats and I just decided it did not matter.  Once a year, Nancy and I wrangled him into a cat carrier for his shots and exam.  I decided would be a good idea to keep a Katrina cat to see if his health would be effected by sitting in that muck for 2 months.  As the years progressed, Jimmy still remained FERAL – FERAL – FERAL but was well behaved and never tried to escape.  Everything was good until June this year.  His weight was dropping and I could see his hip bones.  On Tuesday, June 16th, Nancy and I wrangled him into a carrier and I dropped him off at All Care with a note to “Do whatever is necessary to see what is bothering him…blood work, x-rays, etc.”  Several hours later, Dr. Patty called with the bad news…Jimmy had a massive tumor in his intestines.  Surgery was ruled out and euthanasia was the recommendation.  Jimmy passed over the Rainbow Bridge about 12:30 pm last Tuesday.  This one was hard.  He had been through so much in his younger years but his last 10 years were protected here at Barn Cats.  I finally got to pet him as he laid on the vet table under sedation.  What a nice boy!   RIP, Jimmy!  You were loved here at Barn Cats, Inc. and we will miss you. 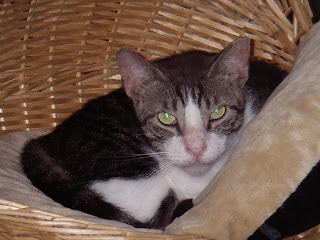 Several years ago, I had an oil painting done of Jimmy with a New Orleans background of broken windows.  Gaye Kelley from Highland Village, TX did the painting. 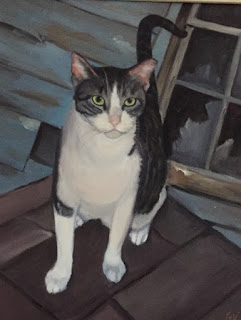 Our Cats after Release:
1.     Aubrey – Danny and Dandy (two orange/white tabbies) were placed on this big horse ranch in Aubrey.  Sorry I did not see them when there to pick up equipment but the barn owner sees them running the property so – good news!
Bad Calls/EMAILS:  Don’t Leave a Message…
…then not check the messages for over a week…WHAT?  Lady left me a message and I called her back the same day…leaving a message.  She did not tell me how many cats were involved or what city she is in.  SO – cannot help with that little info.  She never returned my call and I just wrote it off.  She called back this week stating the same problem.  She never got my first message BECAUSE SHE NEVER CHECKS THE MESSAGE BOX!   Oh, good!  I was home this time,   answered the phone, got the info then gave her some suggestions.  Hope it works out for the cats’ sake.

BMG:  City Ordinances
If you are going to have lots of animals, you should first check your city ordinances.  Almost every city has a limit to the number of animals you can have and the types of animals you can have inside the city limits.  Ignorance of the information is no excuse when a neighbor turns you in and Animal Services starts issuing citations.  $$$ can add up fast.  The other problem is that they will probably give you a limited amount of time (usually 72 hours) to resolve the problem.  That is never enough time to find homes for pets (cats or dogs), birds, chickens, ducks, or whatever else you may be keeping.  Either live in an unincorporated area, know the limits for your area, or keep all of them inside the house where no one else can see them.   Some cities have a variance process but that takes time, too.  Just know where you stand and be ready.
OMG:  OOPS!
I always tell anyone going on a relo that they must wear closed up shoes – no sandals.  Well, I got to Pilot Point this week still wearing SANDALS!   The grass was high and the horse poop evident but I had no choice.  Just make it work and try to not let it happen again!

Auction Closeout
68 people attended the Barn Cat Bash on Sunday, June 7th at Bistecca in Highland Village.  It went very well – food and service were both terrific.  We had both silent and live auctions.  Looks like we cleared about $10,000.  We need to purchase a new Ford Transit Connect and these monies was be a good down payment.  Look at these pictures… 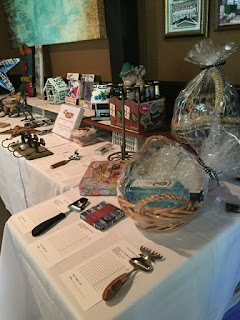 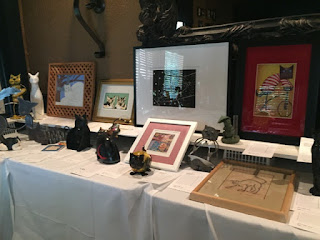 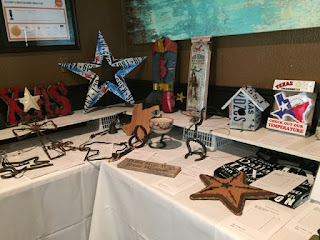 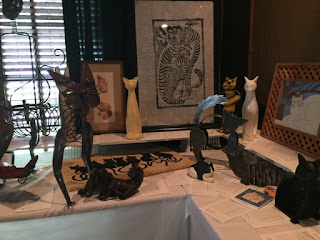 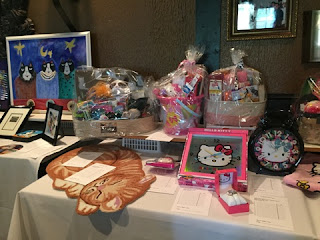 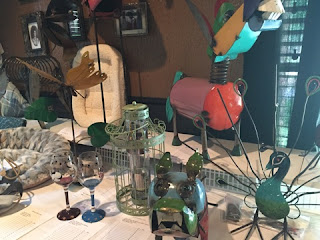 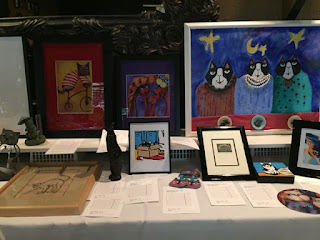 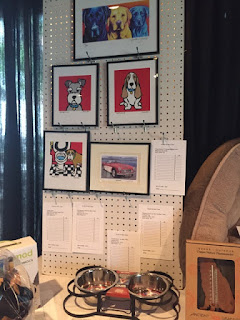