Our Cats after Release:
1.     Pilot Point:  Willy and Thunder went to this workshop.  Willy is hanging around and is seen regularly and Thunder occasionally…which is exactly opposite of what I thought would happen.
2.     Celina:  Phara and Ashby went to this insulated shed in Celina.  He has put in a cat door in a window for them to come and go.  Phara was in the hidey box when I was there so I just picked up equipment around her and left the box.  Lots of food is disappearing so other neighborhood cats may be enjoying the buffet!
3.     Dallas:  Crystal and Christopher went to this office in a Dallas business.  Rodent droppings are GONE!   YEAH TEAM!  Got a picture of Christopher. 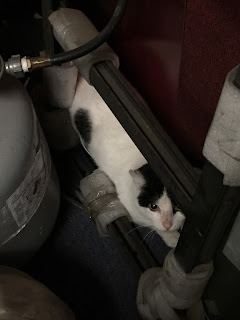 Calls/Emails:  Six-Screen-Long Text
I am continually amazed at folks that send LONG, LONG, LONG text messages.  They put in their story about the cats they want to place and have lots of questions.  TEXT MESSAGES ARE NOT FOR THAT KIND OF COMMUNICATION!  You need to send an email or call.   People don’t want to call any more…we are so used to FACEBOOK, etc. that we do not want to hear a live person on the phone.  I am not reading long text messages so get over it!   ALSO – that is expensive.  You have questions, call me.  I return all calls.  GEEZ!

BMG:   12-Year-Old Cat at Kill Shelter
The SPCA of Texas has a Senior-for-Seniors program.  If you have an elderly cat or dog that you need to place, CALL THEM.  This wonderful, large gray/white cat was taken to a kill shelter because “THEY GOT A NEW PUPPY”.  Will you get rid of the puppy when it gets old?  I HATE PEOPLE!  Guess where that cat is now -- HA HA!
OMG:  Electric Pole Blocking the Road
When I went to the business in Dallas to pick up the equipment for Crystal and Christopher, the office manager told me a truck hit a pole and it is leaning over the road in front of their entry way.  OOPS!  Glad she told me so I could come in from the other side.  There was police tape everywhere…what a mess!  But I got in and out with no problem coming from the other side.

Our Cats after Release:
1.     Ennis:  Nancy and Clyde went to this garage in Ennis.  Somehow Clyde got out of the cage after only 2 nights…???   Nancy stayed for the 2 weeks.  The property owner called and was upset because Clyde was gone.  WELL – HE CAME BACK!   Here is his picture in the garage: 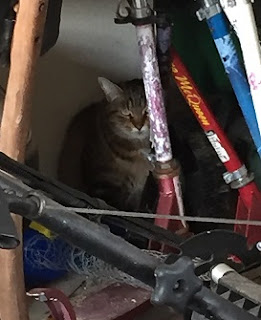 3.     Flower Mound:  Ashton and Ms. Kitty went to this shed/barn.  Ms. Kitty was spotted in the rafters when I was there.

4.     Fairview:  Skipper, Mckayla, and Sweetie went to this barn in Fairview.  The rats are gone so the cats are still around even though they have not been spotted.
5.     Royce City:  Meanie, Monty, Minnie, Morty, and Maggie went to this barn with 2 horses, 2 donkeys, and 2 children.  They have all stayed around.  These 5 were from the property where the rescuer passed away…so…good they are all together.

Calls/Emails:  Moving on Wednesday
I received a call last Monday wanting me to “come get these cats” because he was moving on Wednesday.   (Sure – be right over!)  Also, he was in the far reaches of the universe and none had been sterilized.  A neighbor who had moved told him the ASPCA would help but he did not have that number.   SURE – The ASPCA is in New York City.  This conversation did not last long.

BMG:   Cats Not Released
This has happed TWICE in the last week.  I set up appointments to pick up equipment.  When I got there, the cats had not been released.  In both cases, the cats had been confined for over 3 weeks rather that the required 2 weeks.  Interesting that with both cases I had done the relocations with GUYS.   HUMMM!   You know, the date are in the paperwork in the folder that I left with you.  Nice people but not paying attention!

OMG:  2 Became 6  ???
I took 2 females to Alba, TX to live in a shed.  The property owner called this week that 4 other cats had shown up to eat.  Come to find out the previous owners had moved off and left 4 cats that had been living in the woods.  Our two had invited them in for dinner and they have stayed.  The property owners will try and find out if those had been fixed.   We shall see…