Cats after Release:  Only picked up in one location this week.
1.      Azle – 6 cats from Valley View went to this location.  I originally set them up in a large shed that is used for furniture storage.  For release, he moved them to a different building where they can make their permanent home – lots of places to hide out and the building has windows.  I took a picture but it is dark.  If you look closely, you can see two of the six cats.  I think they will be happy here!  The barn owner is the fire chief for the small community.
Calls/EMAILS You Don’t Want to Get:  Remember the eviction in Trenton from last week, well Rhonda got 8 the first time and only saw 3 additional on the property.  Another group captured the last 3 cats and hooked up with Rhonda for the transfer.  WELL – those 3 and 2 of the first 8 were FRIENDLY!   SO – they will go into the adoption group she works with – North Texas Cat Rescue.

BMG:   Paperwork:  Still no paperwork from Irving and now no paperwork from Ft. Worth.  WHAT IS UP WITH THIS TREND!  At least bring a rabies certificate folks.   GEEZ!  Twice as much work with all this follow-up.

OMG:  Roger and BJ went to an indoor/outdoor location in Nevada.  I set them up in the garage.  A member of the family is recovering from a serious auto accident and the “boys” have become company for him.  Male bonding – I guess!    Glad it worked out! 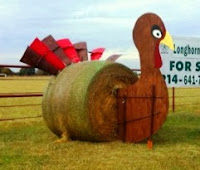 In Corsicana, Tank (who I rarely saw in my cat room), came out and let the husband pet him!
SHOCK! 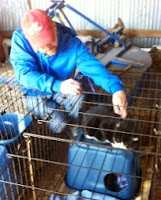 Cats after Release:
1.      Anna – Mr. Nanty (Nathan) and Tank are seen each night patrolling the property.  There are many free-range chickens on the property and the cats are keeping their distance from the large roasters! 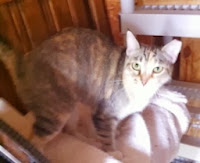 2.      Trenton – Kennedy, Macie, and Elaine have all been seen regularly around the barn area.  I got a picture of Kennedy in their “sleeping” area.

3.      Bells – I have put a total of 9 cats out on this property.  Girlfriend and Cindy have left the “man cave” and are hiding out in the hay barn…rat haven over there!  This picture is of a cat I put there about 4 years ago.
4.      Mineola – I send two new volunteers off to Mineola to collect the 3 triple cages that were there.  When they arrived, they discovered that the ranch manager HAD NOT RELEASED THE CATS A WEEK AGO!   SO – they closed the workshop, and let the cats out.  The manager set up food and water and the barn owner added a litter box when she arrived later that day.  Those were all cats from a school in University Park.  They are doing well there.

5.      Flower Mound – Tootles and Custard are hiding out at the back of the barn.  They are doing well.  I had to take the picture from far away so as not to spook them.  Sorry it is not really clear!

7.      McKinney – Fluffy (now Lilly) continues to thrive in her heated shed in a backyard.

8.      Bartonville – Lots of good news here including pictures of cats from many years ago.

Calls/EMAILS You Don’t Want to Get:  A person with many dogs and cats in Trenton was evicted this week.  He continues to return to feed the animals.  Local adoption groups are taking friendly cats and dogs – but – you know what that means:  Barn Cats will probably get all the “left-overs” – the unadoptable cats.  Rhonda is going out there to trap on Sunday night.  None are sterilized – of course.

BMG:   From last week:  All that paperwork is STILL not completed from animal services who got the cats done without letting the volunteer “pick” them.  I continue to wait – almost all those cats have been placed now and I am left to MAIL those documents when they are received.

OMG:  Took in 4 cats from a person in an apartment complex.  One went in to be spay but needed a neuter….Rosie went in and Roger came out!   Here we go again!  Two weeks in a row!

The Greenhouse in Flower Mound turned out to be a couple I had known many years ago.  We attended the same church.

In Era, the store manager asked for 5 BIG spayed females.  So, I went to Lewisville Animal Services and got 5 big females from “death row”.  One, Sterling, has worked her way into the office onto the leather sofa and is even SLEEPING WITH THE DOG!

Cats after Release:
1.      McKinney – The 5 we placed there (Sabrina, Puddin, Lucy and Lonnie) are doing well with the llama protecting them.
2.      Parker – Ion and Izy are going well but are more “elusive”.
3.      Wylie – Ivy and Sugar are going well.  The other two previous placed cats have also been seen recently.
4.      Rockwall – These 3 are still living in the shed where I placed them.  There is a loft and even a window!

Calls/EMAILS You Don’t Want to Get:  A local trapper was asked to go through a house to trap in the backyard.  WELL – HOARDER!   The good news is that there are only 3 cats living in that filthy house.  An appointment was made to get the inside cats, but the people never showed up.  YOU CAN ONLY DO SO MUCH if the people will not cooperate!

BMG:   I said I would take 10 cats from a local Animal Services organization.  BUT – all had to be tested, fixed, and given shots.  WELL – the group did not wait for the volunteer to pick the cats (I needed a group of friendly and feral PLUS no body under 8 months and no white cats).  SO – they picked 10 cats and sent them to the SPCA clinic to get the work done.  HUMMM!  One was a solid white, front declawed cat!  WHAT?  ….and 4 others were too young.  THEN – they did not get the correct paperwork.  It has been over a week and I still do not have rabies certificates for those cats.  WHAT A MESS!

OMG:  Took in a cat from Lewisville Animal Services “Bella”.  She went in to be spayed BUT needed a neuter – in as Bella and out as Bill.