Chris and Charles came from the same location in Burleson but were delivered here 1 month apart.  When I put them in the cage in Justin, one ran into the carrier of the other – AHHHH!  Most likely they are brothers – both Lynx Point Siamese-looking cats.

Nacho came from Hickory Creek Animal Services.  He was neutered late in life so his urine smells really bad!   We put him in Blue Ridge in their stallion barn – keeping all the “boys” together.  Looks like he has made a friend… 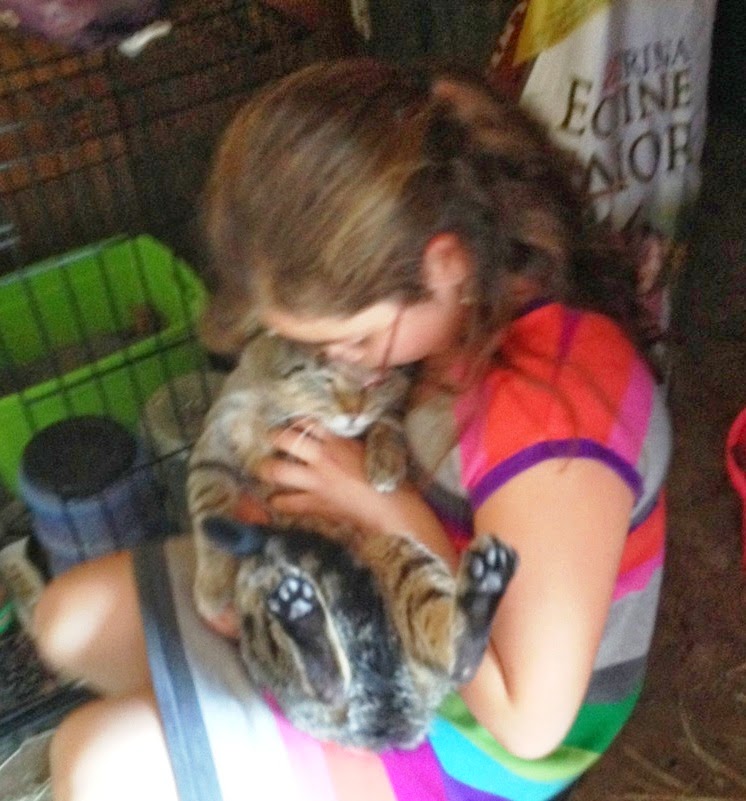 Our Cats after Release:      Picked up equipment in 4 locations this week.
1.      Ponder:  Manny went here to be a friend for Sally.  Neither one is still there.  So – don’t know – just no sign.
2.      Rockwall:  Randi, Larry, Lori, Ginger, Mary Ann, Gilligan went to this workshop/garage.  This is the location with Obama, the llama.  The barn owner brought the equipment to their rock yard so I did not return to the barn.  SO – did not get to see any cats and/or Obama.  She said they are all still around…so good news!
3.      Rhome:  Lilly and Carmen are doing well here.  Again, I did not get to see them because the barn owners left the equipment outside the gate so I could just pick it up (they were not home).
4.      Rockwall County:  The family here loves Icarus.  He is doing well…again…equipment was left outside the gate.  Did not get to see him.
Calls/EMAILS You Don’t Want to Get:   Pregnant Cats
From last week – the mom and 5 2-day-old kittens:  I did not hear from those folks until I left an phone message that basically said – if I do not get the rest by next Friday, we will not help you.  SO, the other female and male came in on Sunday.  The female from the second litter I received last week was pregnant when she was spayed on Friday.  Just picture:
Mom with 5 kittens
Female pregnant (from second litter)
2nd female probably pregnant (from second litter)
Son (from second litter)
People assume that sisters, brothers, mom, and/or dad will not have sex with each other – WRONG!  Also, they can get pregnant while they are nursing.
BMG:  Message in Subject Line
Received an email with the entire message IN THE SUBJECT LINE!   WHAT?  I could only see about 8 words.  I had to print it out to see what the person wanted.  Geez!

OMG:  Good Stuff
1.      There is a new Great Pyrenees Rescue location in Whitewright, Texas – Grayson County.  The lady starting it is working on her 501C3, etc.  Will be wonderful to have a second group to refer folks to that is closer to them.  We put 7 cats there this week.  There will not be a coyote for 30 miles around this location.  She currently has 10 Great Pyres! 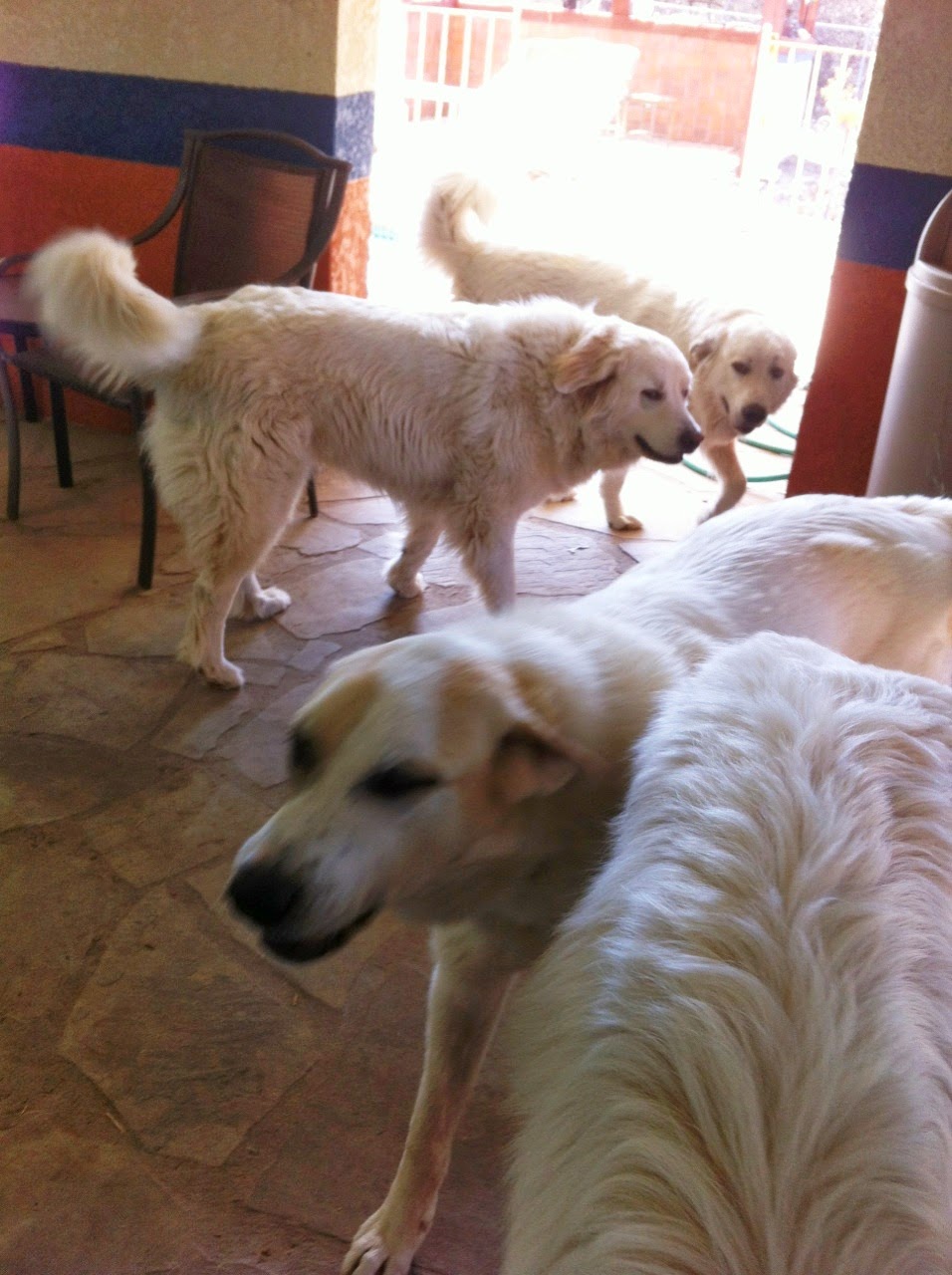 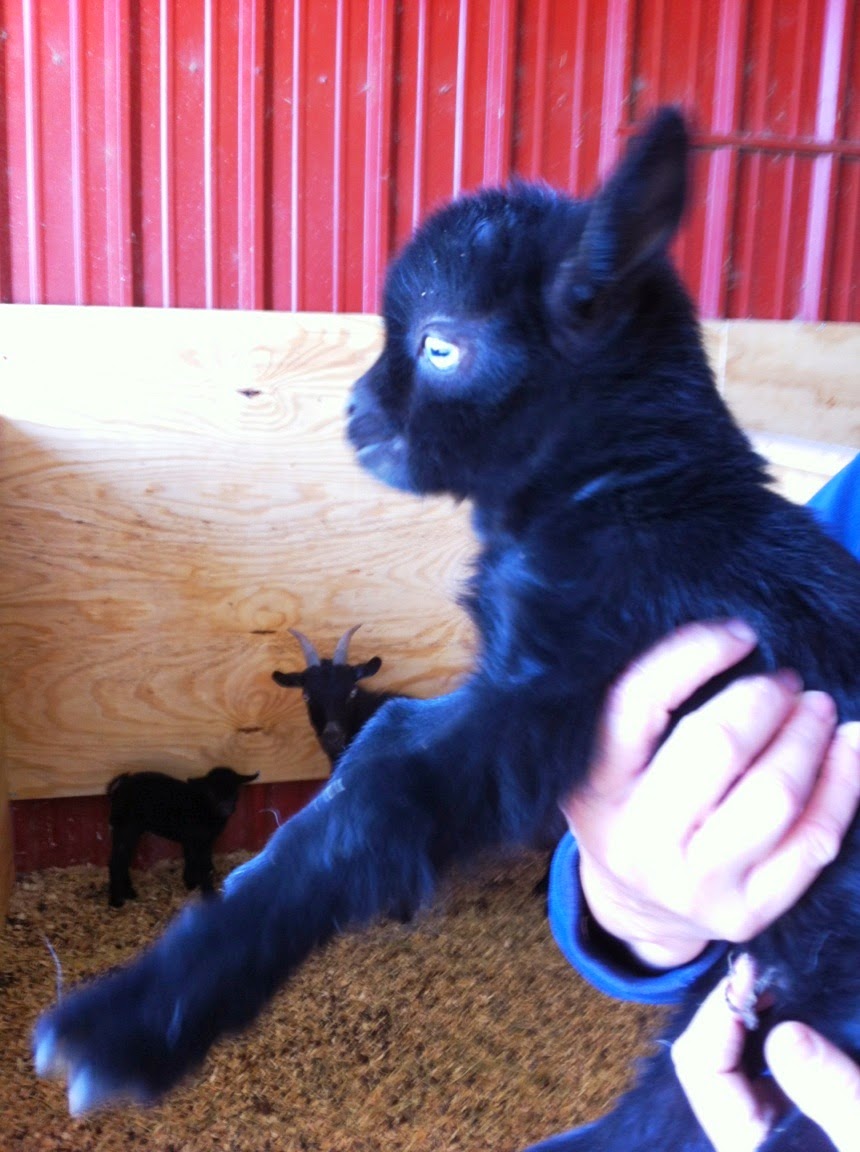 2.      Received a call from an Oklahoma City suburb this week.  Sorry – out of our service area but she called because she saw the barn cat piece on RFD TV this week – YEAH – they are running out stuff again!   Always good news!
3.      YES – There are some people that do plan:  I received a call from a lady who is going to take 3 ferals from around Love Field – the Southwest Airlines building and put them at her barn in the Waxahachie area.  I am going over on Sunday (April 13th) to set the equipment and they will trap on Sunday night.  Two weeks ahead!  THANKS!

Mikey was a young gray and white that had been living in the parking lot of a Mesquite Motel for over a year.  A kindhearted resident called me and I went to pick him up.  All Care tested and neutered him that afternoon and gave him rabies and distemper shots.  On Wednesday, an adoption group wanted to do a trade….no problem!  Now Mikey will get a safe, in-door home.

I received a call from Ellis County.  Animal Services for the county is handled from the SPCA of Ellis County that is in Waxahachie.  Because this family lives in the county, it would be a $50 cost per cat ($300) to take those cats to their animal shelter.  These kittens were 1 day old when she called Barn Cats.  I made some calls and ARF (Animal Rescue Foundation) took them on Saturday afternoon after they brought them to Lewisville.  This was her THIRD LITTER.  Now, the kittens will get safe, in-door only homes after they are sterilized.  Mom will also get a safe, in-door home after she is stay and she WILL NOT BE HAVING ANY MORE KITTENS!

The 5 orphaned 2-week-old kittens were found in downtown Dallas in a hole – starving, scared, and cold.  Made a few phone calls and got Feral Friends to take them into their adoption program.  Thanks to Ashley for taking in the kittens and emailing Barn Cats, Inc.

Our Cats after Release:      Picked up equipment in 1 location this week.

Calls/Email You Don’t Want to Get:  Residual Full Moon

2.      Remember the older couple who are moving into senior housing?  I called and spoke with the wife.  I could not understand what she wanted/needed.  So asked to speak to the husband because he has originally sent the email.  He did not call back.  I called again and got him but he was driving.  I asked him to call me when he got home.  THAT WAS 6 DAYS AGO – I give up!

BMG:  Good or Bad? – You Decide
I receive calls from other parts of Texas wanting me to take their cats.  I only accept cats from the 37 North Texas counties that we service – here are plenty here!   The only exception is where there is some sort of national emergency…hurricane, tornado, etc.  When I can, I give them the info from any previous calls/emails I have received from barn owners looking for cats.  The lady has 14 cats to place – none are sterilized, no shots, no testing.  The barn owner I referred her to is going to take all 14 and is NOT CONCERNED that none are sterilized!  So – is this a good thing or a bad thing?

OMG:  Is it Lewisville or Louisville?  I received a call at 7:42 am from Louisville, KY.  Hummmm!  They are 1 hour ahead of us.  Someone heard barn cats discussed on his local NPR radio station while he was driving to work.  So, he looked Barn Cats up on the internet and called Lewisville, TX.  OOPS!  I just send him back to call that radio stations and see who was on that morning.

The Bartonville location has 3 donkeys.  They were having lunch while we were there. 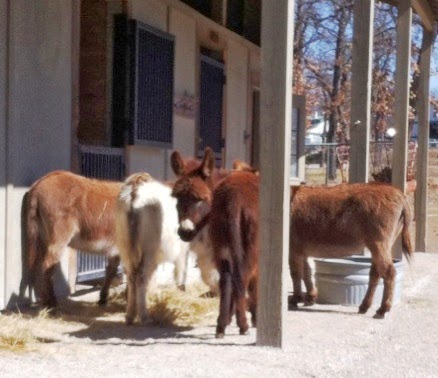 Cats after Release:      Picked up equipment in 4 locations this week in 3 counties.
1.      New Fairview:  Meadow, Sheila, Ashes, and Georgia went to this barn.  I have spoken about Meadow before – she has moved into the house!   Did not see Sheila, Ashes or Georgia but the barn owner has seen them.
2.      Ponder:  Harry and Sally went here.  Sally is living on top of the tack room but Harry has not been seen since release.  So, when I picked up equipment, I took Manny over there to be friends with Sally.
3.      Anna:  6 cats were placed here:  Monroe, Mazie, Fluffy, Alice, Annabelle, and Lucy.  All are still in the workshop.  Monroe is Mr. Friendly and Alice can now be picked up.  Mazie, Fluffy, Lucy and Annabelle are more allusive but I got a picture of Mazie.

4  .Terrell:  Cici and Sophie were placed in this workshop that is attached to their home.  Both are doing well and get along with the kids and the dog.  They came from Lewisville Animal Services

Calls/EMAILS You Don’t Want to Get:  Is it a full moon?  YES it is!
a.      All our cats have been sterilized with a negative test for feline leukemia plus rabies and distemper shots that are current.  This cat has probably not seen a vet because she did not know the cat was pregnant.  ALSO – probably not had a leukemia test and/or rabies/distemper shots.
b.      If/when she gets that cat sterilized; it will be upwards of $300 at a regular vet clinic.  If the kittens survive, just multiply $300 by the number of kittens!  Barn Cats does not charge a fee but asks for a donation which is usually between $50 and $100 – much less that $300!
c.       We never take kittens:  They can be carried off by a hawk in the daytime or an owl at night.  That is probably what will happen here…poor kittens!
d.      If she does not socialize the kittens, the surviving ones may become FERAL – then she will have to trap them if she can find them.  If she cannot find them, they will have kittens…and kittens…and more kittens!

2.  I worked with a lady in a small town south of Crandall (where a spay/neuter clinic is located) to trap and sterilize a group of “dumped” cats. Well, now she has a terminal illness and needs to relocate these cats….OK….but how many are there? She could not really answer any of my questions:
a.      How many?  7, 8 or 9
b.      Are they sterilized?  YES
c.       How many kittens?  6 (then they are not all sterilized!)
On and on and on – This was Wednesday evening.  SO – I asked her to make a list by name and description (maybe not all named) and then call me back on Thursday.  THEN with an accurate count, we can put a plan together to get the problem resolved.  OK – that was 4 days ago and she has not called me back.
3.      Received an email from a guy who he and his wife are moving into senior housing from what appears to be a more rural environment.  “We are worried they will go hungry and cold/wet” – said the note.  “I have no traps and no place that will take them.”  OK – I can help if there is enough time to work it out...but…
a.      He left no name
b.      There is no time frame given
c.       There is no location (they may be outside our service area…???)
d.      He left 2 phone numbers:  One has no message box (each call goes directly to the message box – probably the phone is turned off) and the second was NOT A WORKING NUMBER.
GREAT!   …plus “we check emails as time permits”   I sent back my home and cell numbers but have not had a phone call.
BMG:  Mango – 12-year Old At LVAS:  OK – why is there a 12-year-old cat at Lewisville Animal Services?  …because some uncaring human put her there.  She is safe now with Larry and Cindy in my guest room…but – MOVING – REALLY – abandon your cat after 12 years!  How would you like to end up at CPS when you were 12-years old!

OMG:  Oops!  Not Vultures  -  This proves it:  I am a cat person and know nothing about birds.  There are no vultures in Texas….but there are buzzards.  There are lots of buzzards in Texas!  (see pictures from last week)