Seeking someone to take over Barn Cats, Inc.:  I would like to officially retire as Executive Director in 2019.  I can retain the fundraising pieces but would like to stop the relocations, equipment pickups, phone calls, and emails…the day-to-day stuff.  I will be available for consultation…  If interested call or email Barn Cats…972-315-2875 info@barncats.org

BLOG for 5/30 to 6/4 will probably be late due to the fundraiser on Sunday.  I will try to get it done on Saturday but that depends on set up for the event.

Our Cats after Release:
1.     Midlothian:  Eevie, Athena, and Sam went to this barn right behind the family home.  All are still around, killing stuff, and doing a great job.  The family is happy with their Barn Cats!
2.     Poetry:  Gracie, Sara, and Uni went to this garage.  All are still around and they are seeing “body parts” that are the proof.
3.     McKinney:  Junior went to this workshop.  All is well but Junior caught a cold and had to see a local vet…but he is OK.
4.     Trenton:  Serena went to be a friend for Tilly.  Well – she is hiding out for the most part will come out when the wife comes into the workshop area.   They love both cats (especially Tilly because she follows them around) so all is well.
5.     Fairview:  Marcia and her son, Mansfield, went to this backyard.  They purchased a cat house and Mansfield was inside when I was there.  I tried to get a photo but he turned away.  OH WELL!
6.     Morgan Mill:  Paul, Bryan, and Gary went to this workshop.  The property owner is bring back the equipment to Dallas but I have been unsuccessful meeting up with him…however…Bryan and Gary are handing out in the workshop and Paul has moved to the barn next door.  So – all is well in Morgan Mill.
7.     Celina:  Alpine, Spot and Katiano went to this really “nice” barn.  All are around.  One was still in the carrier so I transferred her to their carrier when I was there.  I thought I took a picture, but cannot find it.  BUMMER!
8.     Dallas:  Donny, Sammy, Cream Puff, Lucky, Bridget, Thomasina, Alonzo, Donny, Ernie, Mulder, Felix, and Batman all went to this outdoor museum.  They have spread out over the property and I saw 3 of them. 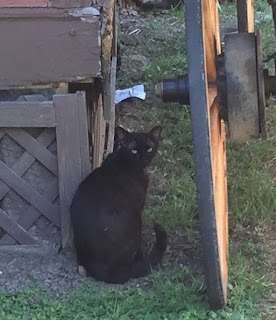 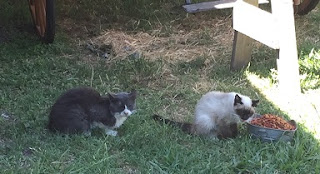 Calls/Emails:  (no entry this week)
Working on auction.

BMG:   (no entry this week)
Working on Auction.

OMG:  (no entry this week)
Working on Auction.

Seeking someone to take over Barn Cats, Inc.:  I would like to officially retire as Executive Director in 2019.  I can retain the fundraising pieces but would like to stop the relocations, equipment pickups, phone calls, and emails…the day-to-day stuff.  I will be available for consultation…  If interested call or email Barn Cats…972-315-2875 info@barncats.org

Our Cats after Release:
1.     Celina:  Blue, Nadia, Sushi, and Taco went to this workshop in Celina.  Nadia got out by bending some cage pieces…first for us!  But, she is at one of their neighbor’s property.  Taco has also been spotted at another neighbor’s barn so he is still around.  Blue is at the original workshop and doing great.  They have even petted him.  Sushi has not been seen but chances are she is with Taco.
2.     Lone Oak:  Elvis, Elvira, and El Fenix also went to a workshop.  They are all in the workshop and doing well – plus no rodent droppings.
3.     Southlake:  Oreo, Blackie, and Tuxie went to this barn.  Well – they all took off…???  The food is not disappearing or the litter box used.  The property is surrounded closely by other houses so hopefully they have just found “better food” with a neighbor.
4.     Van Alstyne:  Cinnamon and Piper went to this garage where both are doing well.  Cinnamon is the torti and Piper is the tabby/white. 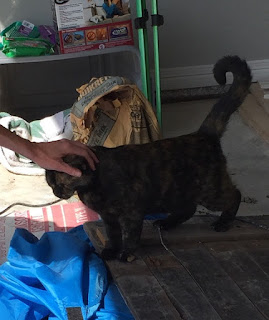 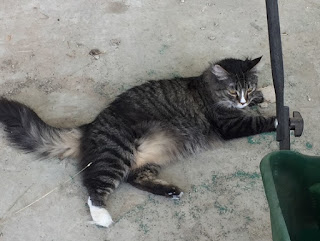 5.     Argyle:  Midnight went to this barn to be a friendly guy for Jello, Scampi, and Shorty.  All have been spotted early in the evening roaming in and around the barn.
6.     Dallas:  Kit-Tee went to this warehouse in North Dallas.  He is doing GREAT!  I did not get a picture but his favorite place to hang out is a cardboard box.  Whatever works!
7.     Denton:  Leo went to a barn where I have previously placed 4 feral females.  Leo has drawn out two of the ferals who are now friendlier. 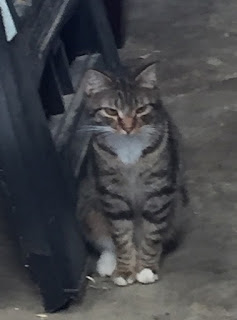 Calls/Emails:  HOARDERS!
They’re back!   Currently working with a group in Clifton where the city is after an elderly lady.  Local rescuers cleaned out her once but – as you know – it always happens again.  I am taking who I can when I can.  Some are turning out to be friendly.  Cindy went to an adoption group on Sunday – VERY CUTE LITTLE TORTI.  Going to take 6 this week if I can get cats placed on Monday.  The second HOARDER is in Cooper.  Will start working with those cats in June after the auction.  Her daughter has removed over 70 kittens from the property.  GEEZ!

BMG:   Problem at a Local Shelter
Received a call that a no-kill shelter had 2 ferals.  I said I would be by on either Friday or Monday.  I went to the Lewisville “kill” shelter on Friday, got two cats, and drove to the other location.  When I arrived, the cats WERE NOT THERE – with a foster – AND they had not yet been spayed.  WHAT?  I asked those questions.  Anyway, I left the two from Lewisville and told them they would have to deliver the two ferals to me after they are vet’ted.