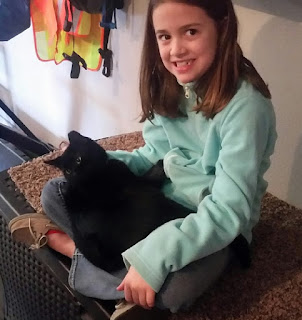 2.        Greenville:  Posey and Petunia went to the barn on an organic farm just north of Greenville.  Both were seen that morning and are doing well.
3.        Fairview:  Spot was placed in the garage and Mork and Mindy in the barn.  All are doing well.  Mork and Mindy have taken up residence in the rafters of this small barn in a neighborhood.
4.        Van Alstyne:  Tinkerbelle, Loni, and Grace went to this goat farm where they have 4 or 5 Great Pyrenes dogs for protection.  All 3 are living on top of the tack room is an insulated feral house that was given to Barn Cats by the SPCA of Texas….many thanks!    The barn owner had said she had seen those on line and it is a $300 value – geez!  BUT – it will house all 3 cats and keep them warm this winter.
5.        Gunter:  Vivian and Effie were placed here.  Both are around and I saw the Siamese Mix but did not get a picture.
6.        Flower Mound:  Tobi and Emma were placed in this insulated barn.  Emma is not in the house and Tobi is enjoying the barn.  Both are doing great!

Bad Calls/EMAILS:  Guilt Trip:  15-Year-Old Cat to Animal Services
A guy called the main Barn Cats number and I answered the phone.  He went on and on, never took a breath, and I had to yell at him to listen.  He continued to talk over me and had a “smart” answer for all my questions/comments.  Then he tried the guilt trip:  I guess I will just have to take my 15-year-old cat to animal services.  THAT DID IT!   I told him he is going straight to HELL and I hung up on him.

BMG:  From California to Maryland
I received a call from a lady in Maryland who said a person she knew was driving from Maryland to California to pick up her 25 cats.  Probably 10 or 12 of them are semi-feral.  There are places in California that do barning but she had not pursued it.  This person in Maryland wanted me to take those semi-feral cats and she would get her to pass through Texas to drop them off…WHAT!  No – if this person did not pursue getting them placed in California, she is not going to drive into Texas to leave them here even if I would take them which is not the case.  We have plenty of cats here!  She was just trying to help but I would be willing to bed the owner of the cats would not give them up.  Sorry – cannot help with this one for sure!

OMG:  Christmas Vanna
Vanna is a Turkish Van that we put in a barn in Bartonville several years ago.  I received this photo from the barn owners.  She is doing great and looks really good in the hat!

Tornado Update:   Barn Cats, Inc. homestead was not affected by the tornado in the metroplex.  However, we had several sites in its’ path where we had recently placed cats.  I have been in contact with all those sites (Glenn Heights, Red Oak, Rowlett) and none were hit but it was soooooo close – like less than ½ mile.  Don’t Mess with Mother Nature!

Hal – RIP
Do you remember the female cat that had “external tumors” -- balls?    Well, Hal was FIP+ and had lots of health problems that we just could not seem to get under control.  He quit eating for 2 or 3 days – I was force-feeding him but he would just throw it up.  I went to the Emergency Clinic on Saturday morning and had him put to sleep.  What a kind, gentle soul – but he just did not have a chance.  His final 2 months were safe and dry here at Barn Cats.  HAL – GET A BETTER BODY NEXT TIME!   RIP, Mr. Hal!

Blog Suspended for 1 to 3 Weeks

Our Cats after Release:
1.        Southlake:  DeeDee, Shelley, Skitty Kitty, and Ginger went to this barn right behind the family home.  I saw the dilute torti but could not get a picture.  She saw all 4 just that morning – so – all is good in Southlake.
2.        Saint Jo:  Scotty, Yankee, and Ariel were placed in this hay/feed barn north of Saint Jo near the Red River.  I saw one run from us in the shadows and the barn owner had seen all three the night before.  YEAH!
3.        Waxahachie:  Thelma and Louise went to this barn home.  The barn owner saw both just before I arrived but I did not set to see them.  Love those two girls!  Hope they have a great life in Waxahachie.

Bad Calls/EMAILS:  Jerk!
The phone rang and a guy was mumbling about a kitten.  I could not understand him and asked “What are you trying to do?”  He yelled “JERK” into the phone and hung up.  OH WELL – I was going to explain how to find an adoption group but I guess HE KNOWS BEST – HA HA!  Sorry for the kitten!

BMG:  Two Kittens from a Dirt Road
A LISD teacher was visiting with his parents in the Whitesboro area.  He was driving down a deserved dirt road when he saw two, small kittens.  He stopped, opened his door, and they jumped into the truck!  He returned to Lewisville on Monday and brought the kittens.  I took them because he had no other options and traded them to an adoption group on Saturday.  Now, Ben and Jerry will get safe, in-door homes!

OMG:  Two Cats Returned
A barn owner decided to sell her property and move.  The purchaser did not want the two cats that have lived there for 1 ½ years.  Mary, Martha, and Lazarus were placed there in the spring of 2014.  Mary went away but Martha and Lazarus were still in the garage/workshop.  I went over to the location in Cedar Hill, set up a cage, and left 2 traps (just in case).  The plan was to “lure” them in the cage with wet food and close the door.  After almost 3 weeks, it worked last Monday evening.  I retrieved the cats, the caging, and the traps on Wednesday.  I have placement for them in Red Oak in several weeks.

The Blog will be suspended for a couple of week while I recover from some surgery.  There are barns and cats waiting, so hope to be “back in the saddle” soon.