Our Cats after Release:
1.     Pilot Point:  Heidi, Arlo, Jada, Jazz, King, and Prince went to this horse farm.  They got out of the horse stall (fully enclosed, we thought!) after only a couple of days but the workers are seeing 5 out of 6 – so all is good.
2.     Plano:  Rambo and Robin went to this backyard with a swimming pool, barn, and tennis courts.  Rambo has made friends with the family dog and now they play and sleep together.  Ahhhhhh!  Robin is “roaming” but has been spotted.
3.     McKinney:  Sadie, Mandy, and Rocky went to this horse barn.  All have stuck around – GOOD JOB, PEOPLE!   …and no more rodent droppings.
4.     Haslet:  Jett and Milo went into this shed.  Both have been spotted on the property and the rodent populations is down.
5.     Lucus:  Jane and Cisco went to this goat farm.  Both are still there and Jane is now friendly – who knew!

Calls/Emails:  Hurricane Harvey Cats
It has finally happened….hurricane cats!  These were evacuated from the Houston shelter BEFORE the weather got bad.  The SPCA of Texas received 50!  Yikes!  5 were deemed unadoptable so given to Barn Cats, Inc.  I placed 3 in a shed in Grapevine where they can be safe and hopefully happy.

BMG:   Bobcat – SCARY!
Received this picture from a “neighborhood” in the city – not a country location.  I can do without these creatures roaming around – for sure! 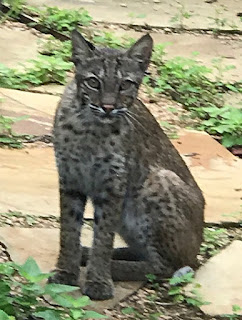 OMG:  Hurricane Irma Cats
On Saturday, I received a text from a local rescue group that is receiving 40 cats from Florida who were Irma cats.  Two are feral (I will bet more – but we shall see) and I will be getting them when the transport arrives the first of next week.

Our Cats after Release:
1.     McKinney:  Savannah, Pepper, and Georgia went to this barn.  Savannah and Georgia have taken off but Pepper is still around.  She is living under a shed but eating and pooping.
2.     McKinney:  Molly and Sammy went to this sheep barn.  Both have stayed around and have been spotted.  Sammy is friendlier and always “out”.  Molly is more secretive but has also been seen.
3.     Argyle:  Harry and Sophie went to the loft in this barn.  Harry will take treats from the wife’s hand and has been petted.  Sophie (now Sally – GET IT – Harry and Sally) was sitting at the top of the stairs.  I saw her but it was too dark for a good picture.
4.     Hickory Creek:  Coopa and Glenda went to this garage with a window for them to come and go.  They have not been spotted but the litter box has been used and food is disappearing….so….I think they are still around.
5.     Pilot Point:  John, Speckles, Bill, and Buttons went to this barn on VERY LARGE property.  One of the orange tabbies was in a horse feeding area and I got a picture.  One other was behind equipment and too dark to get a picture.  All 4 have been seen in various locations. 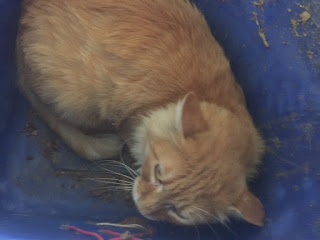 6.     Van Alstyne:  Bubbles went to this backyard with an outdoor kitchen.  She is doing great and looks like the dad is a CAT GUY! 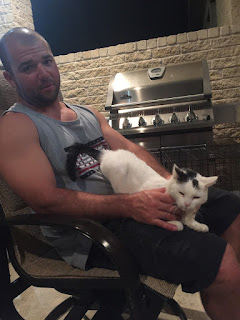 Calls/Emails:  Nothing this Week

BMG:   Non-Closing Carrier
When packing up Holly to go to Hillsboro on Wednesday, not only did the carrier door not fit, but there were only two screws holding it together.  Don’t know how that happened.  Also, Holly is a WILD ONE so this was scary.  I did put several bungies to hold shut the door and quickly got it into the garage where the extra screws are kept.  Emergency avoided but don’t ever hope that happens again.

OMG:  Lewisville and Dallas Symphonies
The opening concert for the Lewisville Lake Symphony was Friday night.  A young Korean violinist, Kyung ah Oh, was terrific.  She played a Prokofiev violin concerto that was really unusual.  I enjoyed it!
Saturday evening the Dallas Symphony had its Fall Gala at the Meyerson.  Yo-Yo Ma was the guest artist – WOW – never heard the cello played like that and Jaap Van Zweden, the conductor, was incredible.  This is his last season with the DSO and I’ll bet they will miss him FOR SURE!   Geez – glad I was there!

Our Cats after Release:
1.     Sachse:  Florian and Leonie were placed in this barn with a couple who I put cats with that are now IN THEIR HOUSE!   HA HA – I teach them to do that!  They are hiding in the rafters but the food is disappearing and the litter box is being used.
2.     McKinney:  Alice, Marigold, and Persimon went this brand new barn.  Marigold never really got to be friends with the other two and she took off.  Alice and Persimon have become fast friends and are staying in the barn.  The family has 2 Great Pyr puppies to keep the girls safe.
3.     Lucas:  Rocky went to this barn with the couple that are both veterinarians…lucky boy. 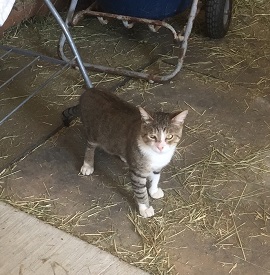 4.     Farmersville:  Tobias and Rose went to this barn with the house attached.  Rose has been spotted early in the morning and Toby is out most of the time and really seems to love the people. 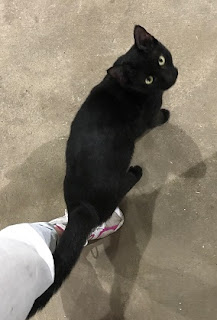 Calls/Emails:  White Cat – Poor Baby!
Received a call about a white cat to place in a backyard.  Well – we do not accept white cats AND we traditionally do not place cats in backyards.  The family decided to move him to their new house so I packed up caging and drove to Buckner Blvd. south of I-30.  Unfortunately the cat tested positive for feline leukemia.  The owner was at a spay/neuter clinic who would not euthanize the cat – they are not full service.  She took my caging (just in case) but started looking for a vet to put the poor cat down.  BUMMER!   Wish it had been a more positive ending but at least he did not die in the dirt.

BMG:   2 Scheduling Mishaps
1.     Drove to Kennedale south of I-20 to deliver 3 cats.  Well – the barn is shared with that family and the neighbors.  Their side was not closed in so cannot leave the cats there.  The neighbors were at work, so the relo was postponed.  The good news is that it is now rescheduled for next Monday.
2.     Drove to Celina with 3 cats and the larger caging so that a newly-purchased feral house could be put in the caging for the relocation period.  Got there but the feral house had not yet arrived from Chewy.com.   BUMMER!  I set up the caging and left all the other equipment (feeder, waterer, litterbox, food, extra litter) and brought the cats back home.  That set up is also rescheduled for next Monday.

OMG:  Random Act of Kindness
I found a new Starbucks in Wylie on Hwy 78.  I stopped in between picking up equipment in Farmersville and Wylie.  When I got to the window, the car in front of me had paid for my drink.  MANY THANKS!