Check out Beauregard.  We got him out of the Lewisville kill shelter.  He is enormous! 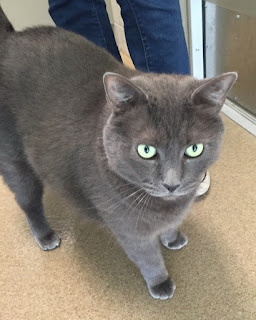 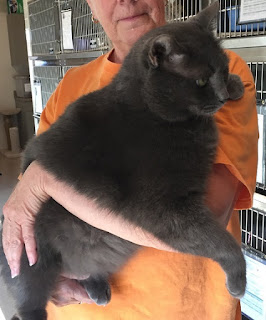 Our Cats after Release:  Picked up in Frisco where Sally and Mallory were placed in this garage in a gated community.  Both are still there.  I saw Mallory and the neighbor that has let me into the garage saw Sally….so….ALL GOOD!

Bad Calls/EMAILS:  Houston Hoarder
Received a call from a Houston suburb.  A lady has had 3 kittens a day for the last three days put inside the cat door of her unit.  (Obvious resolution:  Close off the cat door at the front of the condo.)  Now she has 9 kittens to deal with.  If she takes them to the local humane society, it will be $30 or $40 a kitten to place them with that group.  I recommended she go to see if a group that works out of Petco and/or PetsMart can take the kittens.  She said she understood but still went back to the HS and the charges.  She obviously does not understand!   Then she says she knows where they are coming from because a lady several doors down is a HOARDER.  OK – go to the HOA and complain.  She says she had done that with no results.  I said to contact that humane society and turn in the hoarder.  She does not want to anger the neighbor.  WHAT?  She is abusing cats and you do not want to anger her?  I had to disconnect from the call at this point because she just does not get it and was not listening.  I am not familiar with groups and/or have any contacts in Houston.  She will have to address this one locally.

BMG:  End of our Spay/Neuter Program in Bonham
We have had very few placements in August and September but spay and neuter operations have continued which is good.  BUT – I got the MasterCard bill and it is out of sight!   We pay it off every month but it is way out of hand now because of no money coming in.  When no cats go out – we get no money from barn owners.  Then we cannot take in any cats, so we get no money from in-take. ALL BAD!  I had to stop the spay/neuter program in Bonham.  We cannot stop buying food, litter, or gasoline…so the spay/neuter program had to be discontinued at least for now.  Hopefully we can start back up before spring kitten season.  BUMMER!

OMG:  Texas Country Reporter Festival
We had a booth reservation at the festival for the 3rd year but then the rains came!   I did not set up the booth but since I was already there, did some shopping for the up-coming auction.
About ½ the booths did not show up – I felt sorry for the folks that were there – so I think my purchases were appreciated.

Witch Hat Weekly Special Photo – Tess
Tess is one of my personal cats from many, many years ago.  She is now 15 years old.  She is not the most pleasant cat – only likes me and not even any of the other cats.  Also she has some “bad litter box” habits (read between the lines) which has always been a problem.  BUT – you cannot discard a 15-year-old member of your cat family so I just make it work.  Anyway, this is Tess in the Witch Hat. 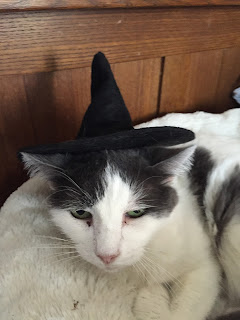 Our Cats after Release:   No equipment picked up this week.

Bad Calls/EMAILS:  Drunk Driver
Three cats were orphaned when their caregiver was killed on his way home from work by a drunk driver.  His relatives were in town from Illinois and called Barn Cats.  We picked up the cats on Wednesday because they were returning home on Thursday.  BUT – they are friendly cats.  Got them into an adoption group on Saturday – THANK GOD!

BMG:  Cats to Trade
I get contacted almost every week from an adoption rescue group who has gotten in some unadoptable cats (biter, shy, hissy, etc., etc.).  If I have some friendly cats in house, we do a trade OR I ask them to get an equal number of cats from the local Lewisville municipal shelter.  Not every group works with every shelter…but there is always a way to get around it.  BUT, if you want us to take your problem cats, then you need to take in an equal number of cats from where ever.  I am not going to solve a problem for you without your organization stepping up to take in some adoptable cats from a kill shelter.

OMG:  Cats from 2005 and 2007 Relocations
We placed cats this week at locations from both 2005 and 2007.  Both still have some cats around.  The 2007 one is in McKinney.  The people are moving and taking their cat from 2007.  We replaced some new cats for the new people with 4 from a Dallas hoarder.  They should do well.  The 2005 location is in Glenn Heights.  Two of the original cats are still there but they needed some help…so….Jessica and Jason should do well.

Witch Hat Weekly Special Photo – Ducky
Ducky came to Barn Cats from Waxahachie in the spring of this year.  Really nice, friendly young boy!  He is a red, buff tabby with really distinctive markings.  Sorry you cannot see them here.  He is going to stay here at Barn Cats as one of my personal cats…foster failure! 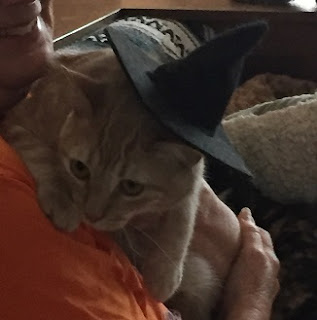 Next weekend is the Texas Country Reporter festival in Waxahachie.  It is a long day but the shopping is good and HOPEFULLY we will get some barn placement leads.   Keep your paws crossed!

Relocations and In Take
Our Cats after Release
Bad Calls/Emails:  Trip into East Texas
BMG (Bitch/Moan/Groan):  Barn Cats to a Cat Sanctuary
OMG (Oh My God):  We Do Not Do Trapping
Witch Hat Weekly Special Photo –Lydia
GittyUp and Go Market

Cheddar will be living in a garage in Waxahachie.  He is a really big tabby with white.  The resident bull dog is already learning his place!  DOGS DROOL and CATS RULE! 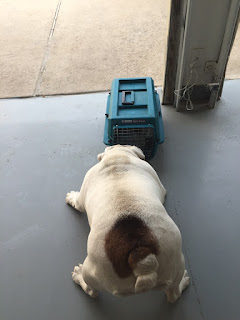 Our Cats after Release:
Flower Mound:  Freddy was placed in this backyard in Flower Mound.  He was a big cat to begin with and now he is HUGE!  I told the owner he look like he had been on a two-week cruise.  He probably needs to stop the MIDNIGHT BUFFET!  But – all the rodents are gone and that is the important part!

Bad Calls/EMAILS:  Trip into East Texas
Someone called from East Texas and wanted 2 cats for a barn/shed.  I explained the process but did not get a warm fuzzy feeling that he was listening.  BUT – made an appointment for between 11 and noon on Sunday and took off from Lewisville about 9 a.m. with 2 feral cats in tow.  I got there about 11 but…he was not home.  I called and he was 45 minutes out from there…hummmm!   He directed me to the barn which will not work because it was not closed in and I am sure I mentioned that when we spoke.  There is a shed but it was pad locked.  So, I decided to drive in to town for lunch and then return in 45 minutes.  Then I called (cause he was not there) – “Just 10 minutes out”.  Well after another 20 minutes, he still was not there.  You know:  If you cannot make an appointment he should be calling me – not me calling him.  I left at 12:30 and he was just driving in – 1 ½ hours after I had arrived.  SO – I did not leave the cats.  If he does not care to make our appointment on time, then he will probably not take care of our cats.  The bad news is that I traveled 241 round trip for NOTHING!  But playing the glad game, I do not have to return in 3 weeks for the equipment.  Best of all I will not be worrying about our cats!

BMG:  Barn Cats to a Cat Sanctuary
I received an email from a rescuer in the New York/New Jersey area who last summer turned over two older kittens to a cat sanctuary who had a barn.  Now she is worried that the sanctuary folks may not be taking care of the feral cats.  It appears that they let them out of the caging after only 3 days!  You know:  There is a reason we say 2 weeks.  They do not know this is a good place and the new source of their food.  Now the 2 cats have wandered outside the compound and winter is approaching.  There is two side to each story and this rescue person may have been driving them crazy with calls and questions.   I told her to get someone locally to intercede – may be someone from another rescue group.  She thought it was a good place (and it may be a good place) but she is not so sure now.   GOOD LUCK!

OMG:  We Do Not Do Trapping
Barn Cats, Inc. is on the back end of the problem.  We take sterilized feral cats and find them a barn home.  YES…we have some traps to loan but we do not do trapping.  PLUS the cats are brought to us – we not pick up.  We help as much as we can but I have to turn away lots of people who have no ability to trap and transport the cats.  Case and Point:  There is a lady east of Dallas who let her cat father many litters of kittens.  Now she is upset because the manager of the mobile home park is trapping the cats and taking them to the kill shelter.  She knows she should have had him fixed but it is too late for that.  I will call her but probably will not be able to help.  Sorry!

Witch Hat Weekly Special Photo –Lydia
This is also one of Julie’s cats…Lydia.  She only have one front leg.  Lost the right one to cancer.  Ian from last week is her son.  At least she will lay next to the hat! 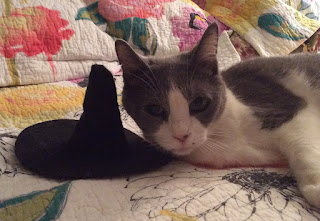 GittyUp and Go Market
This convenience store is along Hwy 78 in Nevada, TX.  Great Name!   Right up there with the “Middle of No Where” market in Oklahoma. 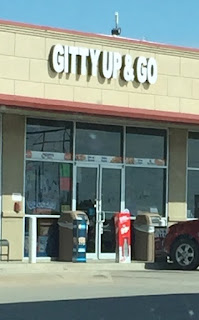 Thanks for following the Barn Cat Blog.  See you next week!       Peg