Relocations
Our Cats after Release
Bad Calls/Emails:  A Funny One
BMG (Bitch/Moan/Groan):  Can you rescue this cat?
OMG (Oh My God):  Pit Bulls and Parolees S7:E24 on
Animal Planet

All our cats going out these cold days/nights are getting winter hidey boxes, rugs, blankets to cover the cages, and either a heater or a heat lamp.
Our Cats after Release:
No equipment picked up this week.

Bad Calls/EMAILS:  A Funny One
4 of the cats that went to adoption groups this week were in “trade” for a cat from a hoarder that is not adoptable.  I got Kiki, Lucy, Jedi, and Yeti from the Lewisville Animal Shelter and Barn Cats got Daisy in return.  That was all on Saturday.  Well, received a text on Sunday, THEY GAVE ME THE WRONG CAT!  I have Luna but with paperwork for Daisy.  Luna is also not adoptable and they are now saying they can take 6 additional cats from Lewisville if I come back and take Daisy and get paperwork on Luna.  I thought I was the only one that messed up paperwork.  Guess it is more of a universal problem than I thought.

BMG:  Can you rescue this cat?
I get many emails each day from folks wanting me to take their cats.  We take who we can each week based on the number of placements that empty out cages.  BUT – received an email from a women this week…“I’m wondering if you could rescue this male black tux cat. He is at Mineral Wells animal shelter and has $150 in pledges.”  My response:  “Where are you?”  Her response:  “The cat is in Mineral Wells, TX. I think that’s about 1 hour 40 minutes west of you.”  My response:  “Where are you?”  …then NOTHING because she is probably sitting in Wyoming somewhere and spending all day scouring the internet for shelter cats to “help”.  Well there are probably 20 animal services shelters between Lewisville and Mineral Wells that could use my help.  PEOPLE – help animals LOCALLY.  Get off the internet and volunteer somewhere!

OMG:  Pit Bulls and Parolees S7:E24 on Animal Planet
I have been waiting for this episode all season and it finally recorded last night.  The first emails I received about this was 3/3/15.  Texas Brine is a company that had a company town south of New Orleans.  They did mining or something that caused a GIANT SINK HOLE to develop and it is swallowing everything.  All the people have been relocated and their homes will be demolished.  BUT – there are 38 cats in that area that need to be saved.  The woman in the episode contacted me in March and I told her we are too far away and do not have enough resources to handle a rescue that is 10 hours away.  I advised her to find someone locally.  She had the idea to call the woman at Pit Bulls and Parolees in New Orleans who got Jackson Galaxy involved.  He is the “My Cat From Hell” guy – a cat behaviorist.  Well, it looks like it all worked out for the cats.  I have sent her an email saying CONGRADULATIONS!  You know rescue can have a happy ending after all.

Gray had been attacked by a coyote we think at his previous location in the Tyler area.  He was found and then healed by a caring person there.  The new care giver in Wichita Falls is aware of all the care Gray received.  Here are the pictures of his injury. 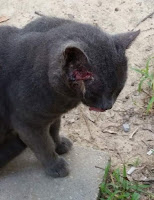 All our cats going out these cold days/nights are getting winter hidey boxes, rugs, blankets to cover the cages, and either a heater or a heat lamp.
Our Cats after Release:
1.     Van Alstyne:  Kiley, Tootles, and Hunter were placed in this barn at a dairy farm.  I saw Tootles.  He is in the hidey box that the barn owner made for him.  Others were not around but that is not unusual. 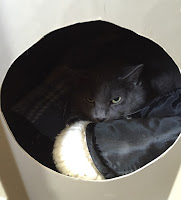 Bad Calls/EMAILS:  Older Cats
It is just not good to put an older cat (10 and older) in a rescue home.  There are just too many other cats and lots of potential germs.  Those cats have been (for the most part) isolated from other cats and probably have not had shots for years.  You really need to find a relative or friend to take it.  I am not willing to do that again.  Barn owners want younger cats that they can have for many years – not one that may die any time!  BUMMER!

BMG:  No Good Deed…
You know I took in 9 from Corsicana on New Year’s Day.  7 were friendly and 2 were feral.  The ferals went to a barn in Denton and are doing well.  Two friendly ones went to an adoption group and I have not heard anything “bad” about them.  4 other friendly cats went to an adoption group.  First, those 4 had feline coccidia that causes diarrhea.  I treated them by mixing medicine with canned food for 10 days then traded them.  One week later, I received a call that they needed to be returned due to a skin problem diagnosed as Demodectic Mange caused by a mite.  I took two to an animal dermatologist who said they needed to be dipped once a week for 6 weeks – GROSS!  …and kept separate from all other cats and each other.  Plus the one left in house (Squirt) also needs to be dipped.  OH GOD!  The good news is that All Care is willing to do the dipping and I have put up cages in my master bedroom for them.  We are 2 weeks into it with 4 weeks to go.  IT'S ALWAYS SOMETHING!

OMG:  One Week Old Baby Goats
The Windom location had new born twin goats.  I got pictures of one nursing mom, the other just sitting, and daddy that explains their coloring.  So cute! 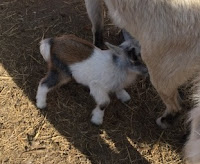 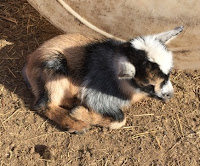 Relocations and In Take:   We had 1 placement this week.
1          Insulated garage in Dallas (Sassy Kitten)
All our cats going out these cold days/nights are getting winter hidey boxes, rugs, blankets to cover the cages, and either a heater or a heat lamp.
Our Cats after Release:
1.     Arlington:  We did pick up in Arlington this week.  Toulouse and Rogue were placed here.  They are doing great and rodent droppings have disappeared.
2.     Denton:  Clyde and Opie were placed in this goat farm barn.  They have several Great Pyrenees dogs and it is as safe as it can be!  I had previously placed Ariel and Koby there.  All 4 are hanging out with a stray that has showed up…Batman… who is more friendly.  All is well in Denton!
3.     Justin:  10 cats were placed in this multiple barn location (Sassy, Zimmy, Tinsel, Jingle, Piglet, Charlie, Fready Cat, April, Samantha, Poppy).  April was still in the hidey box so I got a picture.  Two areas have been set up for them with hidey boxes and the feral house we took over.  One barn has pigs and goats and many heat lamps.  The younger cats are hanging there.  The older ones have moved to the open barn with the insulated feral house.  Large feeders and waterers have been purchased and it is really set up well for them.  Enjoy and DO YOUR JOB! 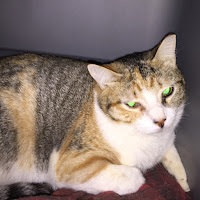 Bad Calls/EMAILS:  Austin Area Problem
I received calls and emails from all over Texas and the US.  This is a problem with an elderly man and his daughter is trying to help.  There are 7 or 8 cats on his property and none are fixed or vetted in any way.  The daughter wants to deliver them to Dallas…nope…there are plenty here.  We take 500 to 700 each year and still have to turn away local cats.  I will make an exception with a national emergency like Katrina or Ike.  We took many cats from those areas that were ravage by the hurricanes.  BUT – there are barning groups in the Austin area.  I referred her to the list on our website.  Hope she follows through with one of the groups that are local to her dad’s area.

BMG:  MUD, MUD, MUD
Here we go again.  There was a storm system running parallel to the Red River in North Texas.  It was right over my relocation barn for Saturday.  Now that relocation of 4 cats is delayed until Thursday.   Mother Nature Wins Again!

OMG:  Gas $1.33 a Gallon – Wow!
Went to Denton to pick up equipment and passed a Kroger with regular gas that price.  I almost passed out!  Had seen $1.39 in Lantana also at a Kroger but nothing at $1.33.  FABULOUS!  We use a lot of gasoline covering 37 North Texas counties….so this is always good news.