Relocations and In Take
Our Cats after Release
Bad Calls/Emails:  Cell Phones in the Country
BMG (Bitch/Moan/Groan):  Not Tested / No Distemper Shot
OMG (Oh My God):  RAIN, RAIN, and more RAIN!

Relocations and In Take:   We had 2 placements this week (Thanksgiving Week).
1     Garage in Crowley (Toby)
1     Adoption Group (Duchess)
Our Cats after Release:
1.        Aubrey:  Butch and Braylee went to this barn in Aubrey.  I have not been able to get there due to MUD but finally retrieved the equipment this week.  Braylee is the longer-haired of the two. 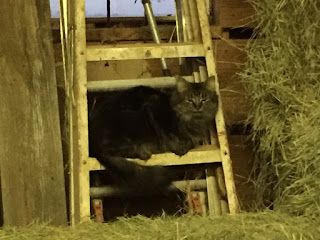 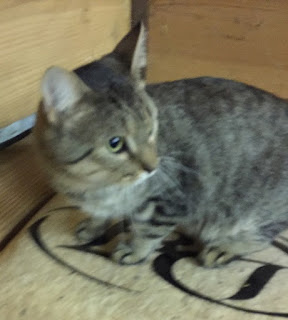 2.        Sachse:  Kiz and Klaus were released into an apartment inside the barn last week and are doing great.
3.        Crowley:  Sparkle has moved on to a neighbor’s house so I delivered Toby there this week.
4.        Valley View:  Sarabi, Fred, Francine, Debbie, Dawn, and Darrell went to this barn home.  Sarabi is now IN THE HOUSE, getting along great with the dogs, and spoiled rotten!  The barn owner is seeing 3 out of the other 5 so that is good, too.
5.        Krum: Dexter, Dallas, Davey, and Donny.  I saw two when I picked up equipment.  There is one behind the front cat in the picture below.  Now sure which it is because all 4 look alike! 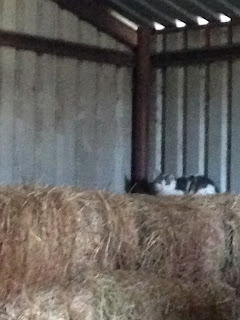 Bad Calls/EMAILS:  Cell Phones in the Country
A barn owner called me about a week ago and I called her back.  She never received the call.  SO – she call me back about 4 days after that and ONCE AGAIN I called her and left a message.  Problem is that she never got my message with my cell number so continued to call the land line and I am rarely home.   I finally got her “LIVE” and it is all worked out to take some cats there this Thursday.  PHONE ABUSE!

BMG:  Not Tested / No Distemper Shot
I was to take a cat on Tuesday that was to be vet’ted earlier that day at the TCAP Burleson Clinic.  The lady asked her son to take the cat and to tell them what to do (test first, if negative spay, rabies and distemper shot).  She even wrote it down for him.  He was to pick up at 5:30 but the ferals were not awake so it was not until 6 that they could be released.  He picked up his mom in Arlington and they headed to Lewisville arriving at 8:34 PM.  Geez!  When I looked at the paperwork, the cat had NOT been tested and had NOT been given an FVRCP shot.  Now I have to take her to All Care, they will knock her out again, do the test and the shot and hopefully she is negative for leukemia…???  We do not know if he did not tell them or the receptionist did not write it down.  It is always something!

OMG:  RAIN, RAIN, and more RAIN!
Several people were unable to get to our fundraiser because of the rain and flash flood warnings.  Our Bonham folks told to not leave the area so they stayed away.  I also have folks cancel due to their home heating unit going out and one with car trouble.  Well, the rest of us had a great time.  Sorry you missed it!   Update on the event next week.  See our FACEBOOK page next week for some items that were not sold.

Relocations and In Take
Our Cats after Release
Bad Calls/Emails:  Undelivered Emails
BMG (Bitch/Moan/Groan):  Returning a Kitten
OMG (Oh My God):  Goat with her own Chair

Relocations and In Take:   We had 18 placements this week.
3     Barn in Van Alstyne (Loni, Tinkerbell, Grace)
2     Barn in Waxahachie (Thelma, Louise)
2     Barn in Flower Mound (Emma, Tobi)
2     Barn in Gunter (Vivian, Effie)
9     Adoption Group (6 from Lewisville Animal Services, Rusty, Tomlyn, Enzo)
Our Cats after Release:
1.        Gunter:  Killian and Ellie went to a barn in Gunter.  Ellie is being more elusive but Killian is right there making himself visible.  All is good in Gunter!

Bad Calls/EMAILS:  Undelivered Emails
I received an email from a past customer that wanted 2 more cats before it got colder.  I did a REPLY and asked for the address and a phone number – neither of which had been included.  WELL – the email came back – WHAT – I did a REPLY!  That was last Wednesday.  I just received an email from her today (Sunday) that she had received my REPLY.  MAGIC AND MIRRORS!  Computers are good and computers are bad!

BMG:  Returning a Kitten
I was at a local no-kill shelter when a lady was returning a kitten she just got from them at PetsMart.  WHAT?  I’ll bet she walked past the cage, saw the adorable kitten, and “had to save it”.  When she got home, she realized it was more trouble and then returned it.  That kitten maybe missed another adoption from a SERIOUS PERSON.  I know you cannot always tell – but I hate people!

OMG:  Goat with her own Chair
This is “Frances”.  She lives in Saint Jo, Texas on a gigantic ranch!  She has her own office chair.  I LOVE THIS! 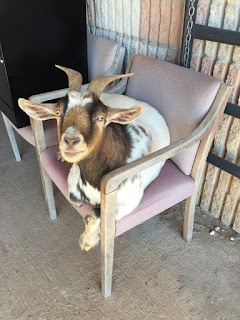 Relocations and In Take
Our Cats after Release
Bad Calls/Emails:  Too Many Cats!
BMG (Bitch/Moan/Groan):  Shelter 50 Miles Away
OMG (Oh My God):  Melted Equipment

Relocations and In Take:   We had 12 placements this week.
3      Barn in Saint Jo (Yankee, Scotty, Ariel)
2     Barn in Sachse (Kiz, Klaus)
4     Barn in Southlake (Dee Dee, Skitty Kitty, Shelly, Ginger)
3     Adoption Group (Mittens, Janice, Johnny)
Our Cats after Release:
1.        Southlake:  Diabla, Riley, and Mama Kitty were place in this barn by the side of the house.  They put in a cat ladder so they can get on top of a storage area and the cats are using it.  They rattle a bag of treats or special food each evening and they come back into the barn area.  ALL GOOD!
2.        Sherman:  Sonja and Stan went to a therapeutic riding stable outside of Sherman.  They are doing well.
3.        Glenn Heights:  Jason and Jessica were placed in this barn when we had put cats over 6 years ago.  The current ranch manager says they are sticking close by which is always good.

Bad Calls/EMAILS:  Too Many Cats!
Received a call from an obviously elderly person that said animal services had issued her a citation because she is “over the city limit” – which is 6 animals.  She has 6 dogs (tethered in her backyard) plus 10 inside cats (her pets) then 20 to 30 feral cats.  Wonder if a neighbor turned her in…???  This was a confusing call because the “feral” cats are not really feral but kittens she took in as STRAYS.  But – there is no spay/neuter going on here and the problem has just gotten worse and worse since she took in a litter of kittens a year ago – which means they are breeding with each other inside her house.  If these older kittens are pick-up-able, then probably can be adopted.  She has not spoken with any of the MANY adoption groups in that area.  I advised her to speak with them then let the rest go to animal services who will get them spayed/neutered and put them up for adoption.  Wonder why it needed to get this bad before she did anything.  I am also worried about the 6 tethered dogs that are all 5 years or older.

BMG:  Shelter 50 Miles Away
A guy from a neighboring community traveled 40 to 50 miles to another community to get a friendly house cat that he proceeded to put totally outside and not feed.  His community has a no free-roaming cat ordinance.  This was in August of 2015.  The cat went to a neighbor who saw he was skinny and started feeding him.  He then gave the neighbor all the paperwork (sterilization record, shot record, microchip, etc) who brought him to Barn Cats.  We will evaluate him and then trade him to an adoption group.  I called that shelter and told them the story but they did not even seem concerned.  Maybe that is why that guy went there…???  He also gave them an incomplete address and they obviously did not check it with a driver’s license.  Well, that house cat’s worries are over.  We will get him back into a safe, indoor home.

OMG:  Melted Equipment
Most of our older style waterers have broken.  The new style is good but the tops CANNOT BE PUT in a dishwasher – they will melt.  One of our equipment pickups, trying to help which I appreciate, did exactly that and the results are shown below.  BUMMER! 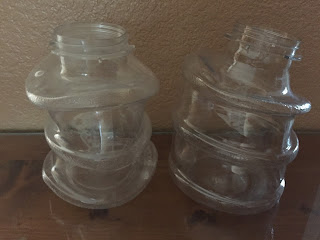