Seeking someone to take over Barn Cats, Inc.:  I would like to officially retire as Executive Director in 2018.  I can retain the fundraising pieces but would like to stop the relocations, equipment pickups, phone calls, and emails…the day-to-day stuff.  I will be available for consultation…  If interested call or email Barn Cats…972-315-2875 info@barncats.org

Our Cats after Release:
1.     Quinlan:  Cooper and Twix are being illusive but the rodent population is down.  I think they are still there…she has seen signs but not the actual boys.
2.     Keller:  Gidget and Fifi send to this barn with all sorts of animals – chickens, horses, peacocks, etc.  They are hanging out in one of the stalls that is used to store furniture.  The owner heard a “soccer match” in the ceiling one evening – guess they are working for their living now.
3.     Saginaw:  Susie was placed in this barn where she was spotted last week by a neighbor with a large RAT in her mouth.  WAY TO GO!
4.     Forney:   Fritter, Garbanzo, and Linus went to this barn.  Linus has turned friendly.  All three seem to love their new digs and are doing well.
5.     Dallas:  Benji, Lightning, Teddy, Whiskers, Jupiter, Spot were all placed in this warehouse.  Benji and Lightning are friendly cats and are living inside the offices – Benji in the back area and Lightning in the front copy room.  The 4 ferals are loose in the warehouse with a wonderful place to hideout and a “cat door” in a wall.  They have been spotted early in the morning or late at night.
6.     Whitesboro:  Strudel and Freddie went to this barn office.  They are playing each night cause the toys are EVERYWHERE each morning.  They are doing well.
7.     Whitewright:  Pom, Tic-Tac, and Amaretto went to this garage in Whitewright.  The family purchased a cat house for them and one cat is using it.  All three have been spotted.
8.     Gordonsville:  This family put up a game camera to watch the cats.  They were placed in a workshop/shed with windows so they can come and go.  All three have been seen on the camera.
9.     Batch Springs:  Miss Kitty and Kevin were placed in this garage/storage area.  Miss Kitty is being illusive but Kevin has turned friendly.  Take a look… 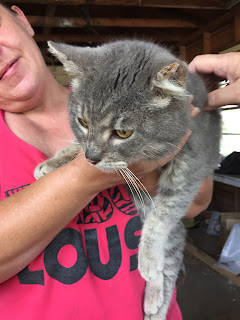 Calls/Emails:  4 Cats to be Moved
A house was sold and the realtor said “The Cats Have To Go!”  So, Feral Friends offered to trap them and get their shots updated and a day was set for the trapping.  I went a day earlier to a home in Dallas that had offered to take the soon-to-be homeless cats.  It has been three weeks so I called to get the equipment picked up.  WELL – the cats were never trapped and the new homeowners are feeding the cats.   ALWAYS GOOD if they can stay where they are familiar…but…I was never called and our stuff has been sitting in their new location for three weeks.  AND – I have been running low on caging and feeders/waterers due to the large number of cats I have been placing.  I could have put that stuff to good use instead of it being in someone’s way.  OH WELL…

BMG:   ANTS!
Guess it is going to be a bad year for ants.  I have had them twice this week in the cat’s dry food in two different barns.  BUT – the cats were released so not exposed to just food with ants.  I will have to start putting out diatomaceous earth each time I put out a feeder.  GOOD GRIEF!

OMG:  Rayburn Tollway Scare
Monday I was headed to Tom Bean in the morning.  I was in the inside lane and wanting to get into the middle lane.  I saw a car in the center lane approaching very quickly.  I waited for that guy but did not move immediately.  He was slowed by a cars in all 3 lanes just ahead.  BUT THEN another car sped by me, cut sharply to the right then the left, went onto the shoulder to pass a van that was ahead of me, then hurried off.  While hyperventilating, I moved to the center lane to calm down and then saw a motor cycle approaching on my left.  IT WAS THE COPS!  YEAH!   That guy took the next exit and was followed by the cop who corner the car on the service road next to a church.  I was very happy to see that for sure!

Relocations
Our Cats after Release
Calls/Emails:  Bone Cancer
BMG (Bitch/Moan/Groan:   I am an idiot!
OMG (Oh My God):  Bluebonnets Everywhere

Our Cats after Release:  Sorry no pictures this week.
1.     Azle:  Ninja, Willis, and Wallace went to this garage.  They have not been spotted but the food is disappearing on the family’s back porch.  They are just off exploring!
2.     Saginaw:  Suzie was placed in this barn.  She had not been seen and the rats are still around.  There are many other barns in that neighborhood so maybe she just found better food somewhere else.
3.     Prosper:  Nugget, Crumbs, Jerry, and Jamie went to this therapeutic riding stable.  Nugget is now a THERAPY CAT and is letting folks pet him…you never know.  The other three are being illusive but I am sure they are still around.
4.     Alvord:  Mandu, Twix, and Okra went to this hay barn at this cattle ranch.  Rats are gone and the food is disappearing – so the cats are still there.  Way to go!
5.     Keller:  Gabby went to this warehouse in Keller.  She is friendly but hides when strangers come onto the property.  The rodent poop is gone so she is doing her job.  Her smell is keeping them at bay even without a body count!
6.     Flower Mound:  Couscous is living under a shed in a backyard in Flower Mound.  The owner can see his head sticking out – I think he may get friendlier as time goes on.

Calls/Emails:  Bone Cancer
A person had a cat show up at her apartment and “did not look good”.  I told her to trap it and get to a get – probably leukemia.  The feeds another cat and I was concerned that (if leukemia) her other cat might have it too.  BUT – not leukemia but bone cancer.  She had the poor kitty put to sleep.  Vet said she was in a lot of pain.  So – bad but good and she did not die in the dirt.

BMG:   I am an Idiot!
Went out Sunday to deliver some cats and pick up equipment in two places.  I was about half way with the cats when I realized that I had forgotten my cell phone.  I really rely on it especially in the country if the roads are not marked or maybe my route is blocked by a closed road or something.  BUMMER!   I did get to the location only to discover I had the two feeders BUT NOT THE WATERERS!  Geez – problem #2.  Guess I was being consistent.  At lease I had all the pieces of the caging.  One time many years ago, I arrived in Justin only to discover that I did not have the DOORS to the cages.   Northing works with the doors – I had to go home, get the doors, and return to the location.  At least Justin is not that far from Lewisville!

OMG:  Bluebonnets Everywhere
Was out on Saturday and did not see a one.  But SUNDAY – they are everywhere and so beautiful.  If you are in the DFW area, they are especially pretty on 114.  Because I did not have my phone, I did not get any pictures.  Will try again next week for pictures.