Our Cats after Release:
1.     Arlington:  Shadow, Harry and Genie went to this large horse riding stable.  Since their release, they have seen 2 out of 3 but lots of food is disappearing.  I’ll bet they are all still around.  The property is also surrounded by family homes which is good in case they decide to roam.
2.     Poetry:  Paro and Midnight went to this family barn.  Both are seen regularly so all is good in Poetry!  The wife can even PET Midnight – YES!

Calls/Emails:   Texting for 7 Months
I was contacted in September last year about putting some cats in Princeton.  That person did not live there but owned the property where other folks lived.  Unsure if they were family or not.  I called and left messages but she never answered or returned my calls.  She began texting on September 21, 2018.  I just wanted to talk with her to see what the property was like and to put a plan together.  TEXTING and TEXTING and TEXTING for 7 months!   I have given up on this one.

BMG:   More Cold Weather
Here it is the very end of March and I am still using winter hidey boxes, rugs, and heat lamps.
All I do is laundry and more laundry when equipment is picked up.  Please, God!  End the cold weather – this is TEXAS!

OMG:   Leo for Adoption
Leo came from Oak Cliff where he was living in a garage.  One night, ne was attacked by “something” that took out a 4” x 4” piece of his skin on his neck below his left ear.  The property owners did not know what to do.  Leo is a very friendly guy and deserves a safe, indoor home.  He came to Barn Cats to get healed and then go to an adoption group.  That happened this week.  He was getting FAR TO COMFORTABLE at my house. 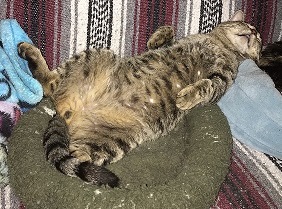 I plan to retire on June 1st of this year.   With that date in mind, I started looking for a replacement person or organization about 4 years ago.  In August of 2018, Operation Kindness came forward and wanted to take over Barn Cats, Inc.  They got a grant to pay for the legal issues (transfer of the 501C3, bank accounts, vehicle, etc.) and assigned someone to be the focal point.  We were told at that time that their board had approved the acquisition.
Well, now we find out that their board had NOT approved the acquisition of Barn Cats, Inc.  Last Tuesday, their board met and decided NOT to approve the project and now it has been scrapped.  We are left high and dry after 8 months.

We have only 2 months left to find another group or shut down.  Since no one came forward in 4 years, the chances of another finding someone to take over are slim to none.  THEREFORE, as of May 1st we will no longer be taking in any feral cats for placement.  That will give me May to place all the in-house cats and get that project completed before I need to retire.  I am also looking for groups that might need caging and the other supplies that we have so those items can still be used…just not by us!

This is a mess.  The problem is that it is the feral cats that end up in shelters will have no avenue for placement.  They will be euthanized.  Sad – Sad – Sad!  We place between 500 and 700 each year and now those cats will be killed.

Our Cats after Release:
1.     Flower Mound:  Mary and Martha went to this barn with no electricity.  Worried about them so got those disks you put in the microwave, heat them up, and put in the cages.  WORKED WELL!   Food is disappearing so the girls are doing well.
2.     Wolfe City:  Philly, Mika, and George went to this enclosed workshop.  BUT – they managed to escape!  Mike and George have been spotted on the property.  They are going in and out of the workshop because food is disappearing and the litter is used.  Hopefully Philly will appear soon.
3.     Cedar Hill:  Eva, Bougie, and Suzie all came from Denton Animal Services and went to this horse stable in Cedar Hill.  Put them in a “lounge” like area with a heater.  There is a window so they can come and go.  ALL GOOD!
4.     Picture of Carrie in Denton – This was reported last week but now have a picture from the property owner. 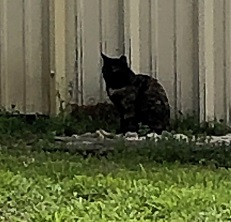 Calls/Emails:   Rejected Barn
NEED BARNS!   …but this one had no fencing and their last cat was taken off by a coyote or bobcat.  OOPS – not yet!   When the fencing is completed it will be a much safer place.

BMG:   Tulip at Animal Services
Got a cat that was owner-released to a local shelter.  When looking at her paperwork, discovered that she was 8 years old, was totally inside, AND originally came from a local adoption group.  I contacted them and they took her back on Thursday.  GREAT!

OMG:   Bart Adopted
I originally got Bart from a family in Grapevine.  Discovered he was very friendly so asked a local adoption group to take him.  He was only in the store for 4 days before a family selected him.  GREAT NEWS!  Now I can put Leo up there hopefully later this week.   More on that…