Our Cats after Release:
1.     Celina:  Casey, Hendrix, and Perky went to this brick shed area at a home in Celina.  All are doing well.  One had an upper respiratory infection.  I got her a shot of Convenia and she is fine now.
2.     Workshop in Ennis:  Carl, Price, Pibb, Sprite, and Fanta went Ennis.  I just added 3 more to the mix.  See below for more info.  All are doing well and Carl is the new “King”!


Calls/Emails:  Fish Hook in Cat’s Mouth
It is the last day of the month/year and I just received a call from a location in Rhome, TX where one of the cats they feed on their porch has a fish hook caught in its mouth.  I told them to get a live trap.  Lowe’s sells them for $50.  Also, some feed stores have them to loan.  He intends to grab the cat with welder’s gloves and then clip the hook so it falls out.  The cat is eating from one side of its mouth – so that is good.  This is a bad day – Sunday – vet clinics are closed unless the PetsMart vets are open.  You can also go to an emergency clinic – there is one is Grapevine. GOOD LUCK and THANKS FOR CARING!
BMG:   Extreme Cold
Excuse me:  This is Texas!  We should not be having a HIGH TEMPERATURE OF 20 degrees!  This is going from Saturday evening of 12/30 well into next week.  Above freezing estimated for next Wednesday.  GEEZ!

OMG:  King Carl in Ennis
The volunteers and I have described Carl at as a bad-ass!  He was always hissing – would not get into the carrier for cleaning – WORLD WAR THREE trying to get him into the carrier to go for the relo.  Now he has turned friendly in Ennis – would have never expected this.  We think he may have been hit in the head by Santa’s sleigh on Christmas Eve.  Here he is checking out the new “girls” I placed there on Thursday.  Now he has a harem, too! 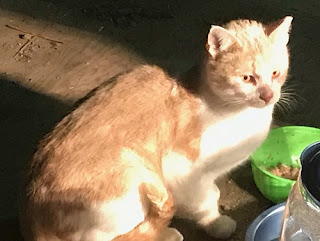