Our Cats after Release:
1.     Cedar Hill:  Jessie, Wylie, and Gracie went to this barn with several llamas.  I picked up equipment on Monday.  One is spending time at a neighbor’s barn (but that is OK with the neighbor) and the other two are hanging out at the original barn.  All is good in Cedar Hill!
2.     Copper Canyon:  Frostbite, Icicle, and Tigger went to this barn behind a family home.   All are sticking around and one was still in the hidey box…so I left it for them. 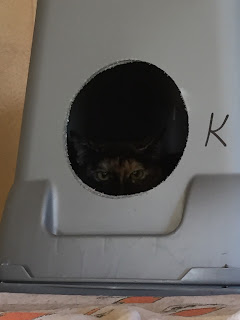 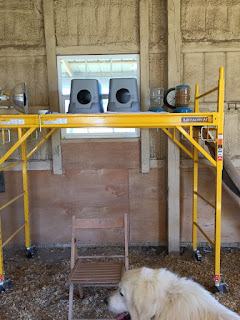 Calls/Emails:  Spay/Neuter Clinic Issue
Received a call from a person outside of Dallas/Fort Worth who went to a local clinic to get a marge male cat neutered.  He is feral so not easily handled.  When she picked him up, it said he has been SPAYED – hummmmm – meaning HE was a SHE.  The owner did not know what to do so asked them to check him out – again.  They refused.  She asked to see the vet – they refused.  She took the cat to another vet clinic who offered to check him out but he/she would have to be sedated.  SHE DID NOT DO THAT.  …which she should have so now we would know for sure.  She saw that cat “having intercourse” with a female cat that evening when she let HIM go.  If she had let that other vet sedate the cat, we would know if he/she had been “spayed” or if this is a paperwork mix-up…???  Will let you know if/when I get an update.

BMG:   Rodents Ate Car Wiring
Received a request to place cats with a lady who had all her car’s wiring eaten by rodents IN HER DRIVEWAY!  Insurance paid for the repairs but said they would have TOTALED the vehicle if they had know the total amound of damage before they started.  It was $16,000!!!!  YIKES!!!!

OMG:  Mama Kitty UPDATE
Mama Kitty is the black/white feral that had the broken leg in the fall of last year.  After the surgery to remove the leg, she went to live a safe live with a family.  I received a picture of her this week on the family couch.  She is doing very well! 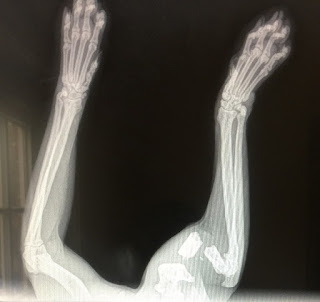 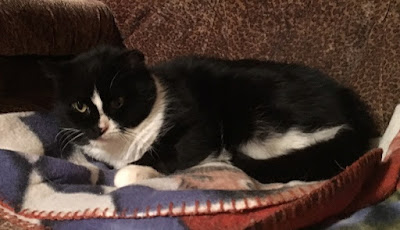 Our Cats after Release:
1.     Krum:  Placed Star and Dusty in this garage workshop.  Unfortunately they took off…don’t understand…friendly people and cat-friendly dog.  Cat Logic!  Go Figure!
2.     Venus:  Sid, Sam, Sherman, and Pretzel are doing great.  They are coming and going through a window in the workshop and all 4 have been spotted by the property owners.  This is the group that pulled a RAT into the caging during the 2-week acclimation period.
3.     Dallas:  Cinnamon and Bandit are living in a garage next to a park.  They have been seen and the food is disappearing.  ALSO – no signs of rodents!
4.     Decatur:  Matilda, Emerald, Stan, and Sue were placed in this storage area with a cat door.  The food is disappearing and the litter box is being used but they are illusive.  If the rodents are GONE, then illusive is OK!

Calls/Emails:  Neurological Problem
Remember when I went to a local school barn with 4 ferals and returned with 3 kittens…Peter, Paul and Mary?  Well, I sent them to a local adoption group who got them all adopted through Petco.  Peter was adopted by a family who had just lost their cat to an illness.  Paul and Mary went together to another family.  While I was out of town, Peter was brought into All Care with a neurological problem…???  I spoke with the adoption group rep and all were OK when I had them and when they had them…so…???  I asked her to speak with Peter and Mary’s family and Mary is also having a problem and is not growing.  Paul, on the other hand, is big and healthy.  This is very odd.  We do not know what is wrong unless there is just something genetically wrong with those 3 kittens.  They were running around that barn with no problems.  This is very strange.

BMG:   Pregnant Cat
Don’t call me that you have been feeding a stray for 2 years and now it is pregnant!   WHAT?  Don’t you know what causes that?  People:  You caused this problem.  Sorry but you would have to have the litter aborted and the mom spayed before coming here.  If the kittens are born, you have just multipled your problem.

OMG:  Problem in Pottsboro
Pottsboro is up next to the Red River and nowhere close.  Received a call from a daughter in New York that her mom has had a stroke and needs to place some cats and dogs.  Her brother is there in Pottsboro (but also lives out of state) trying to get this problem resolved.  They had no idea about the number of animals – YOU HAVE TO KEEP UP WITH ELDERLY RELATIVES SO THIS DOES NOT HAPPEN TO YOU – and now need to get vet records.  The mom is not cooperating with them on purpose or because of the stroke…???   This is a mess.  I gave them what is needed to come to Barn Cats AND they would have to bring them here.  Don’t know if this will work out or not.  The son has not called me since I spoke with the daughter.  We shall see…