Our Cats after Release:
1.     Whitewright:  5 mostly white cats went to Blue Bonnet Great Pyrenees Rescue (Randy, Rudy, Rusty, Ralph, Roo).  After release, 4 out of 5 are bring continually spotted by around the extensive property.
2.     Corinth:  Thor and Poppy were put in this backyard shed.  Thor disappeared for a couple of days but is back.  The shed is all theirs with a cat door, shelves, fuzzy beds, and toys.
3.     Forestburg:  Jesse, Manny, Ossi-Spot, JoJo were placed on this property with llamas and donkeys.  They see the black cats on a regular basis but lots of food is disappearing.  Now a neighbor wants cats so we will be going back there is ones for that property when we pick up the equipment.  It has been TOO MUDDY up there to retrieve our stuff.
4.     Desoto:  Dusty, Sam, and Tank joined Leo, Misty, and Tina at this ranch and riding stable.  Owner says the cats are “Taking Over” -- as it should be!   Glad it is working out.
5.     We placed cats in Iowa City and Archer City outside Wichita Falls.  It has been raining so much they waited longer to release the cats.  We have not picked up that equipment yet so have no update.  (Christi, Charlotte, Josie, Sarah, Skipper)
6.     Hickory Creek:  Mittens is letting the barn owner pet him so GREAT NEWS!
7.     Seagoville:  Ted was placed at this horse boarding location.  Owners are happy and the cat is doing great! 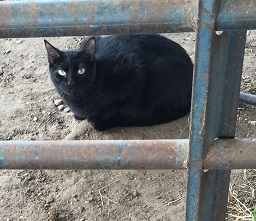 Bad Calls/EMAILS:  45 Cats in New York:  UPDATE
Original:  A lady from New York left me a message at the end of the week.  Her colony needs to be relocated and she is calling anyone she can find on the internet.  I returned her call and left a message – it is 3 days later with no return call from her.  Guess she got the problem resolved…???
UPDATE:  She called when I was recovering from surgery and seems overwhelmed with what needs to be done.  I gave her my best advise but…who knows.

BMG:  Moving to Romania TOMORROW
Yes – you read that right.  An SPCA in California gave a guy our number in North Texas because he has a feral cat that needs to be saved but he was moving to Romania the next day – last Friday.  I told him this was too quick to do anything and I was several states away – referred him to the list on the website of other groups – there are barning groups in California.  GEEZ!  A little more planning would be nice.  Hope it works out!

OMG:  Declawed Cat on Craigslist
We all know you never put animals on Craigslist.  There are folks out there looking for kittens to feed to their snakes!   I received an email from a person who follows this blog that there was a declawed cat on Craigslist in a community we service.  We will be looking for a front declawed cat in the June timeframe to put in a store in Whitesboro.  So, I spoke with the person who posted the entry and she said the cat was with a neighbor who had gotten it from an elderly woman who was going to a nursing home.  Her kids wanted the cat but she does not want to clean a litter box – surprise – they need to poop and pee!   Anyway, we put a plan in place to pick up the cat but when we got there (over 1 hour away) the owner does not want the cat going to a group.  SO – Nancy convinces her that she will take the cats into her home.  The lady in standing in her open doorway holding the cat who is squirming around because there is a guy across the street using a jack-hammer!  I am in the car thinking “this could end badly”.  In the end, the owner decides to give the cat to Nancy and she successfully gets it into one of our carriers.  The cat is safe and will soon be going to an adoption group who ALREADY HAS A NEW HOME FOR HER!   YEAH!   I love it when a plan coming together.

Blog Is Back
The surgery went well on Monday, March 28th and I was only in the hospital for 2 nights.  I recovered at home with in-house physical therapy and a home nurse who changed the dressing.  I saw the doctor again at the 2 week point and he is pleased with how it all has lined up.  Nancy and I went to pick up barn cats equipment directly from that appointment, so I must be getting better.  Now it has been 4 weeks and I rarely even use the cane.  Doctor said “Don’t do anything stupid” – OK, I got it!