Our Cats after Release:
1.     Pilot Point – Fergie and Freddy are having a great time in Pilot Point.  These guys developed a diarrhea when first placed so I pick them up and treated them for 2 weeks.  Now the diarrhea is gone and they have a forever home in Pilot Point.  They continued to hiss at me but let the barn owner pick them up!   This was the right place for them.
2.     Dallas – 6 cats from Clifton, TX were placed at the horse boarding/riding stable.  The cats are being elusive but the food is disappearing.
3.     Tolar – Batman, Robyn, Oreo, and Bandit went to this barn south of Granbury.  They are seeing one of them on a regular basis but lots of food is disappearing.  I advised them to put up a game camera like the barn owner in Graham.
4.     Copper Canyon – King and Tom (2 friendlier cats) went to live with this family just outside Lewisville.  It is a workshop right in back of the house…and…THEY PUT IN AIR CONDITIONING FOR THE CATS!   OK – great move!  THANKS!

We put some cats at a ranch in Frost, TX in the spring.  She sent pictures the other day.  These cats came from Commerce, TX I think.  There was also a torti but no picture of her. 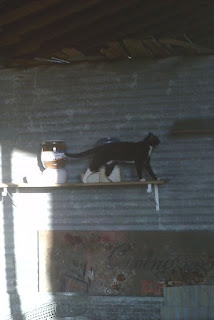 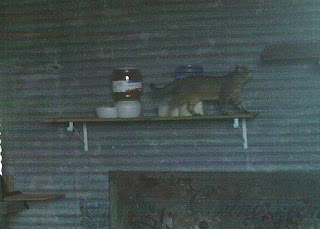 Bad Calls/EMAILS:  Stop the Breeding
There are a bunch of cats living in a storm drain in a community in the southern end of the Metroplex – bet there are lots of storm drains with cats around Dallas/Fort Worth!  The cats have been there long enough to have kittens several times.  How the caller wants to get them out of there – all the kittens have died!  I just hate these calls.  She can get the vet work done for free somewhere but has just never done it.  I told her (like I tell everyone this time of year), I can help you in September but not now.  Get them sterilized and STOP THE BREEDING, continue to feed them, and I can take them in September.  Wonder if she will do it….???
BMG:  Road Rage
We drove the new Chisholm Trail Parkway down to the Cleburne area.  When I took the exit, there was a white truck on the far side of the toll road which is 6 lanes at that point.  I made the right hand turn and continued west.  When I looked in my mirror, all I could see was the grill work on that white truck.  Well, he took the phone number off our truck and left a nasty message.  “We need to learn to drive.  You cut me off.  If I had been an 18-wheeler, you would be dead now.”  I know it was him by the time stamp on the message when I got home.  He called later that night – up close and personal – to let me know he was still pissed.  You know – he needs some anger manager classes or something.  He was not even close when I made that turn AND there were other cars in front of me.  GO FIGURE!
OMG:  UPDATE:  Cats placed in Graham
From last week:  Poof, Pumpkin, Dana, and Jimmy were placed in this barn in Graham.  Only Jimmy is making himself seen currently but I would be willing to bet the other 3 are still around.  We shall see…
UPDATE:  The barn owner put out a game camera and YES all three that she has not seen are still around.  This is Poof, Pumpkin, and Dana.  She is seeing Jimmy.  BEST NEWS EVER!  (love the butt shots) 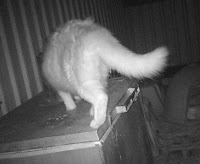 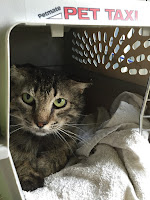 The picture just above is of Jimmy when at Barn Cats.

Finally – A NEW VEHICLE
I have been trying to purchase a new Ford Transit Connect since July 4th.  It has been one thing after another with the “fleet” department.  Finally a regular sales person took over and we got the deal done.  I left our first transit connect at the dealership on Friday.  I miss it!   But we will get the new one next week after some adjustments are made.  Then we will need to get it wrapped…another struggle!  This is the first TC! 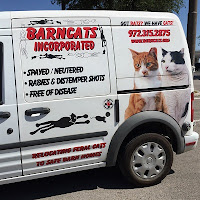 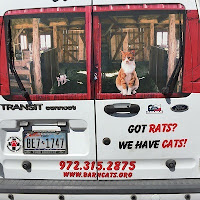 Thanks for following the Barn Cats Blog.  See you all next week.      Peg
Posted by Barn Cats at 2:34 PM No comments:

The 4 to an adoption group came directly out of the Lewisville Animal Services shelter…the kill shelter for my city.  The group had 4 from a hoarder they wanted Barn Cats to take so I got 4 from the shelter.  They selected the 4 that had been there the longest.  This is win-win for the shelter, the adoption group (cats that are fully vet’ted) and Barn Cats for placing 4.  Purr-fect!

Our Cats after Release:
1.     Gunter – Little Mama, Tiger, and Vanna were placed in Gunter with two other cats I placed there last winter…Toby and Tessa.  Both of the original cats are still spotted on the property but are not hanging out in the workshop area.  When the new 3 were put in the cages, Toby decided to reclaim his territory and has come “home”.  Maybe this is just a TOP CAT thing going on.  We shall see but all are currently living well together.
2.     Graham – Poof, Pumpkin, Dana, and Jimmy were placed in this barn in Graham.  Only Jimmy is making himself seen currently but I would be willing to bet the other 3 are still around.  We shall see…

Bad Calls/EMAILS:  2 Hour Drive for $50
What are people thinking…
Someone this week wanted me to travel almost 2 hours EACH WAY to pick up her mom and 3 or 4 kittens (we never take kittens – they can be carried off by a hawk in the daytime or an owl at night).  The offer was to take them for $50 – that would pay for the rabies shots but not the testing, the distemper shots and/or the spaying/neutering of all those cats.  …not to mention the gasoline to get there and back.  I did recommend a group that works with the local shelter there in that town.  Hopefully they can help her.
BMG:  UPDATE:  New Vehicle
Over Monday night, I decided “enough is enough”.  Nancy and I will put a list together of” wants” and “want nots” and gave it to the fleet manager with a date of Saturday, 7/18/15 to get a vehicle on site.  We went over to the dealership on Tuesday and presented the list.  BUT – no vehicle with our requirements was to be found on the internet.  Wednesday, we ordered a new Transit Connect configured exactly as we want it but it will probably be 6 months before delivery.  SO – how many additional miles can be put on the current one until the new one arrives?  I guess only time will tell!
OMG:  Pretty Baby – Finally Trapped!
A lady was trying for over a month to trap a cat with a bad injury to his face and front paw.  When she finally got it last Monday, she brought it to the house and I took it to All Care on Tuesday morning.  I had wondered why the injuries were not healing…???  The clinic knocked him out and took a look….it was cancer!  Poor Pretty Baby!  We put him to sleep so he would not suffer any longer.  It is much better to humanely euthanize an injured or sick cat than to have them suffering in the heat of the summer and dying in the dirt.  RIP, Pretty Baby!  He has no more pain.
“Thanks” for following the Barn Cats Blog.  See you all next week.      Peg
Posted by Barn Cats at 7:50 AM No comments: