BLOG ON VACATION UNTIL JULY 24th

Relocations
Our Cats after Release
Bad Calls/Emails:  Save the Cats but Don’t Spent Any Money
BMG (Bitch/Moan/Groan:  Small Black Kitten Dead on Hwy 820
OMG (Oh My God):  Barn Cat from 9 Years Ago

Our Cats after Release:
1.     McKinney:  Placed Mr. Kitty, Fergie, Millie, Panther, and Priscilla were placed in this barn with llamas and donkeys.  All have been spotted.  I have a picture of one on the black cats and the orange guys, Mr. Kitty. 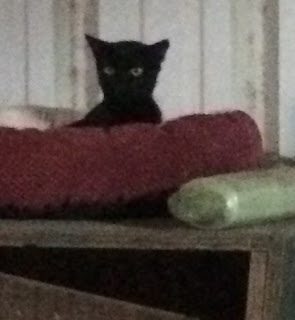 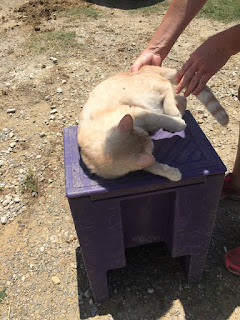 2.     Bartonville:  Gray Bear, Sylverstra, and Twin have moved from the chicken barn to another barn on the property.  All three are still together and were just spotted that morning.
3.     Fort Worth:  Ivan and Sandy were placed at the equestrian center.  The food is disappearing but they have not been spotted.  HOWEVER – the snakes are gone!  YES!
4.     Southlake:  Greta, Brenda, and Stan want to this garage in Southlake.  They are being illusive but they found two dismembered birds in the driveway!  Cats are still there!
5.     Leonard:  Lucas and Luther are two brothers that went to this barn/workshop in Lucas.  Both are black so do not know who we saw…but…here is the picture! 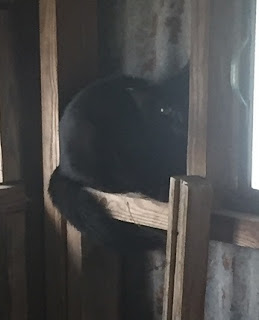 6.     Wylie:  Jerry and Justin went to this backyard patio.  One is still around and is seen each day.  I’ll bet the other is still there too – they look alike.
7.     Lewisville:  Mr. Lucky went to a dog training facility where he can roam free and catch mice all night.  DO YOUR JOB, MR. LUCKY!
8.     Keller:  Butterscotch, Clover, Natalie, Oscar, Monica, and Friendly were placed in a 10x10 foot dog run with a top.  The property owner is keeping them contained for an additional week so she can better bond with them….good idea!
Bad Calls/Emails:  Save the Cats but Don’t Spend My Money
Got a call from someone that wants the cats saved but wants other people to SPEND THEIR MONEY.  Well – it does not work that way.  Sorry!   You want the warm fuzzy – “I saved their lives” but really you did not.  Get a grip!

BMG:  Small Black Kitten Dead on Hwy 820
You know – I hate this.  There was a really small black kitten dead along Hwy 820 in West Fort Worth.  This just breaks my heart.  I hope if there are other kittens in that bunch that they learned from the death of that tiny creature.  RIP, Kitten!

OMG:  Barn Cat from 9 Years Ago
We put a cat in a backyard in North Lake 9 years ago.  Last February, he got sick, probably liver or kidney problems, and they had to put him to sleep.  They were not sure if they wanted another cat because they got so close to Kit.  BUT – the rodents have moved in and they call us again.  Buddy and Stripes were to that lovely backyard.  I hope they have 9 years there as well!

Our Cats after Release:
1.     Aubrey:  Ariel and Trina were placed in this garage connected to the house.  One was seen last night and one this morning.  They are doing well and not being intimidated by the dog!
2.     Rockwall:  Baby and Handsome were placed in this backyard.  Both have been spotted and are living under the hot tub which is where the rabbits are hiding.  Great – they are doing their job!

Bad Calls/Emails:  Sweet Black Cat at a Kill Shelter -- UPDATE
Got Simba out of “jail” on Monday afternoon.  He was hissing and growling at us but calmed right down when I got him in the truck.  Wednesday he was tested, neutered, and got his shots.  The vet staff said “He had the biggest balls we have ever seen!”  HA HA!  I said he was a big boy.

OMG:  Spay Gone Bad
A young cat from Valley View was given to Barn Cats on 6/22 – Wednesday.  I put her in a cage in my family room next to 3 other cats in individual cages.  Someone was crying all night.  I removed Buddy to the cat room.  Then I removed this cat – but the crying continued.  Finally, I covered up the cages of the other two cats and the crying stopped.  When I put this cat in a cage in the cat room, she jumped around trying to get out.  I turned off the light (it was about 2 am) and went back to bed.  That would have been Thursday morning.  Saturday morning, her incision came loose and she started losing lots of blood.  Our vet put her to sleep.  Geez – this had happened to us one other time and the outcome is never good.  I guess if this has just happened twice in 14 years and 6,000 cats – that is not bad…but…bummer!

Relocations
Our Cats after Release
Bad Calls/Emails:  Sweet Black Cat at a Kill Shelter
BMG (Bitch/Moan/Groan:  NOTHING THIS WEEK – I WAS OUT OF TOWN
OMG (Oh My God):  THE BASH IS OVER!

Our Cats after Release:
1.     Lucas:  Bree, Gilmore, and Keeper went to this garage with 2 Great Pyrenes in the yard.  The black one has not been seen but the other two (brother and sister) are always close by.
2.     Prosper:  Pretty, Amalie, and Fran were placed on this property with 2 llamas.  All three have been spotted but then are not hanging out in the hidey place that was made for them.
3.     Frisco:  Grayson and Brute have taken off but that is not unusual.  Their food has been eaten and it is up high so other critters cannot get to it.  I think (as does the barn owner) that they are just out having a good time and will soon be back.
4.     Ennis:  Buster, Sammy, and Meara went to this horse stable.  They are being elusive but the food is disappearing.

Bad Calls/Emails:  Sweet Black Cat at a Kill Shelter
I received a call at 8:40 on Friday morning from a lady who wanted to give up a cat…sweet black cat she took in in October of last year.  I guess when I did not get right back to her (I was traveling back to the Dallas area from a week away) she took it to the Garland Shelter – a KILL shelter.  “He is sweet but I just cannot care for him any longer”.  There are 400 adoption groups in the around Dallas/Ft. Worth and this FRUIT CAKE takes a friendly, sweet cat to a kill shelter.  I HATE PEOPLE!  I called Animal Services on Saturday to see if they still had the cat BECAUSE – once a cat is owner-released to them, they can KILL IT AS YOU ARE WALKING OUT THE DOOR!   I will be over there when they open on Monday morning and try to get the cat OUT OF JAIL and OFF DEATH ROW!  GEEZ – it is always something!

BMG (Bitch/Moan/Groan:  NOTHING THIS WEEK – I WAS OUT OF TOWN

OMG:  The Bash is Over!
UPDATE:  Just made a $4,000 payment on our truck – thanks to the BASH – and we have very few auction items remaining and that is always good.  We only owe about $2,000 on the Transit Connect we purchased last year in July…GREAT!
Thanks for following the Barn Cats Blog.          Peg
Posted by Barn Cats at 6:49 PM No comments: