Our Cats after Release:
1.     Argyle:  Eliza, Hillman, and Katana were to this barn where the family lives in the second floor.  When I was picking up equipment, I found a RAT BODY right outside one of the cages.  YES – doing their job!   The family is pleased!
2.     Celina:  William Casey, and Grant went to this insulated garage with a window so they can come and go.  Casey and Grant have moved to the barn but William is staying put in the garage.
3.     Farmersville:  Tabitha and Misty were placed in this barn with the cutest miniature horse.  They have not been spotted but the food is disappearing.  They hear “sounds” in the barn so the girls are still around.
4.     Princeton:  Ricky, Gidget, and Opal went to this horse boarding/riding facility in Princeton.  All are doing well.  The property owner has seen all of them and mouse poop is much less.
5.     McKinney:  Jimmy and Johnny went to this therapeutic riding location.  Both have been spotted in several parts of the property and the food is disappearing.
6.     Gunter:  Garfield and Linx were placed in this insulated/climate controlled workshop.  They are a KILLING MACHINE!   The property owner was only gone for 2 hours and returned to find this: 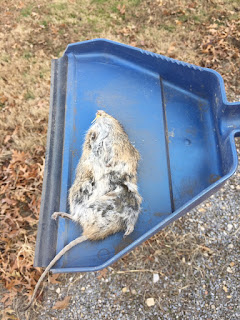 Calls/Emails:  Help in Virginia
I try to return all phone calls and give advice when I can.  This woman in Virginia saw a senior cat living outside when she went to look at a home.  The sellers were family of an elderly person who had passed away.  They were NOT INTERESTED in this cat that had probably been very important to the elderly relative.  She was concerned so called me.  I told her to get the cat – either trap or carrier – and take it home with her.  She kept it inside for a week or so but it got out through a cat door and was gone for several days.  BUT – it came back!   YEAH!  SO – I told her to keep it in again and just hope for the best.  It is getting along well with her other cats…so…I think all will work out.  She could not get anyone in her rural area to help her and then called Barn Cats here in Texas.  I will talk to anybody and I certainly hope that cat is well for many more years to come.  I also hope the uncaring relatives ROT IN HELL!

BMG:   Runaway Cat:  UPDATE
A fuzzy, black feral was being delivered to Barn Cats on Wednsday afternoon.  The lady had him in a cage…not a carrier.  The bottom slipped out as she was coming up my front walk and the cat got out the bottom of the cage.  HE IS GONE!   She walked the neighborhood for two days but was not able to see him.  Food has disappeared from my front potch the last couple of nights but it is too cold to trap – in the teens at night!  But – I do nto know it he is the one eating the food or another cat or a ratcoon…which has happenned.  SO – we shall see.
UPDATE:  Food is disappearing each night but don’t know if it is that cat, another cat, or a racoon!  I am putting a trap on the front porch beginning Sunday when we will have a warming trend.  It was just too cold to perhaps have a cat sitting in a trap all night.  Keep your paws crossed!
UPDATE #2:  You will love this!   I CAUGHT A SHUNK!  …no more trapping for me.   Sorry cat – hope you are well.

OMG:  Airport Therapy Pig – TOO CUTE!
Check it out – look at the painted toenails!