Our Cats after Release:  Picked up equipment in 4 locations this week.
1.      McKinney:  Donna was placed here to be a friend for Grace…but…Donna seems to bully Grace.  We shall just have to see how this plays out.  I have offered to take Donna back if “the girls” don’t work it out amongst themselves.
2.      Pilot Point:  5 Dallas hoarder cats and Scruffy were placed here in this gorgeous barn.  EVERYTHING IS GREAT – I even saw a black one and a gray long haired one at a distance, of course.  I did get a picture of one. 3.   Denison:  Bella, Thing 1 and 2 were placed in this workshop/garage in Denison.  The gamily put up a game camera to check on them.  On the camera, they are seen playing and chasing things…really good!   I did get a picture of Bella on top of a cabinet. 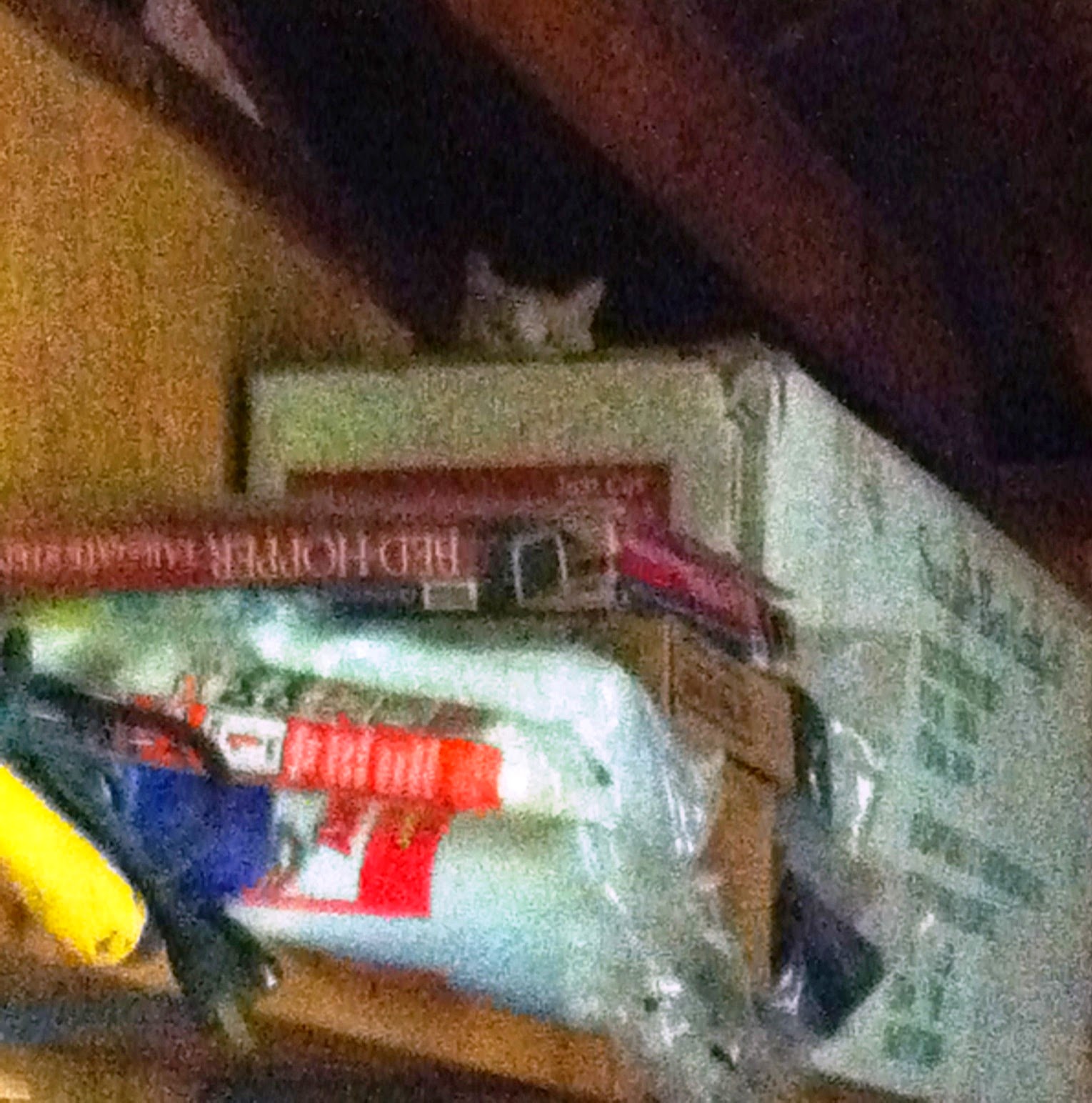 In Memory of Bailey:  In December of 2004, 4 cats came to me from a rescuer.  They had never been outside.  Bailey was a 2 ½ year old gray/white, medium-haired cat that soon decided she did not want to stay in the cat room with 3 others she had come in with….so…she joined my personal cats in the main part of the house.  That was 10 years ago.  She was such a gentle soul – kept to herself and not really warming up to any of the other cats.  Only in the last 6 months had she started coming out on Saturdays to be petted by the volunteers but only if you were sitting down.  She also had a “silent” meow – mouth moved but rarely made any sound.  On Saturday, I left at 9:10 and Neighbor Nancy came over about 9:30.  The other volunteers starting arriving about 10.  They heard her screaming and showing signs of some definite neurological problems.  Nancy rushed her to All Care where it was decided she had thrown a blood clot.  There was no way I could get home before they closed so Nancy stayed with her until she painlessly “fell asleep”.  RIP Bailey!   We will miss your silent meow and soft fur.  I purchased a cross in her memory.

Bad Calls/EMAILS:  “Don’t want them euthanized!”
People let these cats breed and breed and breed and then call me to resolve their “cat problem” which is now at 30!  How about you spay/neuter those cats when there is just one or two?  Then there IS NOT A CAT PROBLEM.

BMG:  Kittens Everywhere!
The other situation is a person that does not want to abort a litter.  OK -- you have just multiplied your cat problem by however many kittens that are about to be born.  Well – we don’t take kittens anyway (they can be carried off by a hawk in the daytime or an owl at night), but I still get those phone calls.  PEOPLE:  WAKE UP AND SEE THE BIG PICTURE!  Spay/neuter is the answer and there are low-cost clinics all over our area.

OMG:  Never Keep a Cat in a Cage
Ran into this situation again this week:  “My husband does not want to keep the cats in a cage.”  These are feral cats – they do not understand that you are their new food source and that this is their new home.  The cage is ONLY for two weeks!  If you just drive up and let them loose, they will run off.  Not going to say what I think of her husband…but…you can read between the lines.

3.    Hand-Carved Wooden Bowl from Pitcairn Island in the South Pacific – This is the island where the Mutiny on the Bounty mutineers settled.  This bowl was carved by a DIRECT DESCENDANT of FLETCHER CHRISTIAN – he is Steve Christian and the bowl bears his signature.  This will be of interest to history buffs for sure!  (Bidding to start at $200)

4.      Large Cat-Art Painting from Santiago, Chile (will also have one or two other cat-art works for the live auction)

We also usually have a Chef’s Dinner for 8 Plus Wine at Bistecca but that has not yet been confirmed.  LOVE THAT DINNER!   Hope Chef Salerno donates again this year.