Our Cats after Release:  No equipment picked up this week.

Calls/Emails:   Eviction
A guy called and was being evicted from a hotel in Dallas.  He has 2 cats.  Only one has been spayed.  He wants us to take the cats because we have helped him before.  I was willing to take them but he called at a very busy time and he has NO TRANSPORTATION.  The good news is that he found someone to bring the cats to me when I returned from a relo on Sunday.  I have vet appointments for both girls on Tuesday.  Hope they test negative….!!!

BMG:   Repeat Customers
I had appointments on Sunday to place 5 in Trenton and 7 in Krum.  Here is what happened:
Trenton:  Had placed cats with them many years ago and the barn was just behind their home.  ALL GOOD!  So, I got there only to find out that the barn is gone and they want the cats to go to another barn location that they own.  Oreo the friendly cat went to be an inside-only cat at their home which was great.  Then we went to the barn.  Their son lives on the property so that was good but the barn floor was very rocky and uneven, the structure was just 4 walls with nowhere for them to hide, and the wall on one side did not go to the ground leaving enough room for a coyote to get under it.  BUMMER – brought the 4 cats for the barn back home.
Krum:  The barn owner wanted to put the caging (3 triple cages) in one of the horse stalls.  Well, the stall flooring was uneven and very soft.  I got 2 cages up but not the third.  I returned with 2 cats but 5 others went out there.

OMG:   Summer Returned in Terrell
Terrell:  Mama, Summer, Simone, and Crystal went to a very nice barn in Terrell.  Summer had a problem with one eye and it had to be removed…but…it all has worked out.  The property owners have game cameras put around to see the cats.  When I left at the end of October, only Summer had not been spotted.  But – received a text about a week or so ago, and SUMMER IS BACK!  GOOD NEWS! 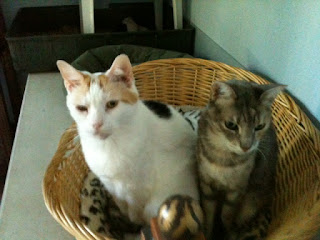 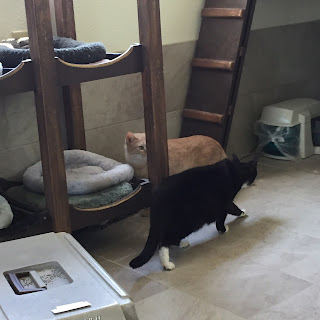